by External source
in Industry News
on 07 Oct 2014 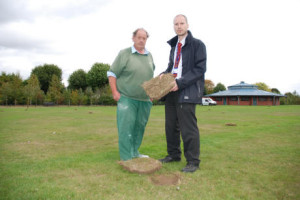 A treasure-hunter has left council football pitches in tatters after digging 100 holes at two recreation grounds. A mystery man with a metal detector is wanted on suspicion of causing criminal damage after being seen digging some 60 holes at Whinfield Rec on Friday evening September 26. A further 40 hold were found at Featherbed Lane recreation ground in Hillmorton.

Both pitches are set to out of action for a number of weeks as Rugby Borough Council has declared them unsafe. A cricket square was also damaged.

He said: "We pay for those pitches to be in good condition. You can't play on pitches with divots in because you could easily break a leg.

"It's sad that someone has ruined people's enjoyment of football just by digging a hole in the ground in the hope of finding a penny.

"I've been involved with the league for 30 odd years and we've had to deal with dog mess and rabbit holes, but never human beings digging up our pitches.

"I'd tell him to come back on Sunday morning and do it in front of 22 people who want to play on that pitch."

He added the league could be seriously hit if further pitches were targeted.

Colin Horton, Rugby Borough Council's green spaces officer, said: "Whoever this person is they did not have permission from us to dig up our pitches, which have now been put out of action for some considerable time.