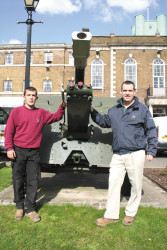 Nathan Chapman is Groundsman at one of the treats of London, the Honourable Artillery Company's ground in EC1

The Honourable Artillery Company (HAC) has a long history. The regiment was established under Royal Charter by Henry VIII in 1537 and is the oldest regiment in the British Army. Based within the City walls in London, the HAC was originally an infantry unit - but its formation pre-dates the introduction of the word 'infantry' into the English language and, at that time, the word artillery was used to refer to any weapon that projected a missile.

However, between 1781 and 1973 the unit comprised both infantry and artillery sub-units. Members of the regiment fought as infantry, cavalry and artillery in the Boer War and the First and Second World Wars. Its base at Armoury House is steeped in history; its grounds include one of the oldest cricket squares, originally laid in 1725.

The first ever hot air balloon ascent in the UK took off from the grounds in 1784 and today the grounds are still used by helicopters transporting personnel into the barracks. It was also used as a burial site during the time of the great plague in 1665.

The site is well used for recreation and sport with the Regiment and local schools utilising the field on a daily basis. The 1.75-hectare site provides enough space to accommodate two senior size natural grass pitches, one for football and one for rugby, a cricket square and outfield, plus a hockey pitch, which also doubles as a summer sports area. The HAC also promotes corporate hospitality events at the ground, which often requires large marquees being erected and left on the ground for considerable periods of time.

The HAC employ a fulltime Groundsman, Nathan Chapman, who looks after the sports fields on his own. He lives on site and has been in post for three years. Nathan was previously a greenkeeper at Henley on Thames Golf Club but fancied a change and the new challenges of looking after sports pitches, particularly cricket.

His main duties are centred around regular mowing of the sports fields and pitch preparation. Nathan employs a local contractor, ATB Sports Solutions, for any additional works such as Verti-draining, end of season renovations and construction works.

This arrangement began in 2005 when ATB won the tender to reconstruct the whole site after the London Bombings in July 2005. The HAC site was used as a temporary mortuary with marquees erected over three quarters of the playing field. These were on site for over three months resulting in most of the playing surfaces being completely ruined. Grass cover was lost and the pitches were also compacted and contaminated.

In the November of that year Rob Kendle of ATB began the job of overseeing the reconstruction of the sports fields and the building of a brand new cricket square. The main challenge was to ensure the work carried out would culminate in the outfields and pitch areas being playable by the following April.
The site was then Koro fraise mowed to take the top 15 mm of old vegetation off. Cultivations were limited to 75mm. The whole area was then powered harrowed, regraded and levelled. 300 tonnes of 70/30 rootzone materials were ameliorated into the surface and the area was pre-fertilised and reseeded with ATB 1 Rye grass seed mixture at a rate of 40-45 g/m2. 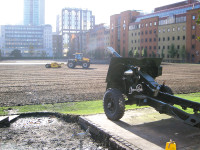 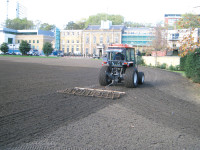 Once the seed had germinated it was up to Nathan, under the guidance of Rob, to maintain the pitches until they became playable.
The football pitch and rugby pitch were brought into play in the autumn of 2006, whereas the cricket will not be ready for play until this season.

The football and rugby seasons run from September through to April, however the football pitch is closed down after November. The reason for this is that the HAC run a number of corporate events at the ground requiring marquees to be erected and left up for between 8-12 weeks, resulting in a total loss of grass cover. So, back come ATB Sports Solutions in the first week of January to completely renovate, cultivate and reseed. 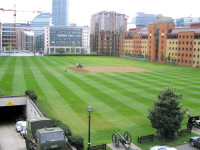 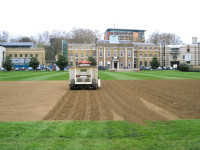 The winter pitches are well used by the HAC regiment teams and also hired out for corporate games. On average each pitch stages 25 plus games per season coupled with training and practice matches.

Work on the cricket square did not start until April 2006 when the whole square was relaid and extended by a further two wickets. The work involved Koroing off 50mm of the old loam, resetting levels and redressing with 75mm of new Ongar loam. The square was then reseeded with ATB 4 ryegrass mix of Sauvignon, Jessica and Evita at a rate of 50 g /m2.

The new cricket square will certainly test Nathan's skills; pre-season rolling begins with the Dennis Mower, gradually increasing the weight until weather and ground conditions are right for using the heavier roller. However, the true test will be when the matches commence. Nathan and Rob will be keen to see how the new squares perform this summer. A 10-14 day wicket preparation regime will be undertaken to ensure the wickets are prepared for play.

Nathan uses a Toro triple cylinder mower as well as a 36 inch Dennis cylinder mower. Mowing regimes are dependant on usage and weather conditions. On average, during the summer, he will mow at least twice a week. Cutting height will vary but, in the summer, he keeps the outfield maintained at around 15mm.

Since his arrival Nathan has gradually improving the equipment at the grounds. Having recently purchased the Toro Triple, 36 inch Dennis and a Kubota tractor, he is keen to replace his existing roller with a new Auto Roller.

Nathan often works long hours in the summer, starting at 6am and not finishing until late in the evening just to accommodate summer fixtures and events. Working at the Honourable Artillery Company is all about providing quality pitches in a unique environ-ment. Nathan reckons it is never boring as he never knows what the next challenge might be. As if to illustrate his point, whilst I was there, two helicopters land on the rugby pitch. It is Nathan's responsibility to ensure the landing area is marked and safely cordoned off. A Groundsman's work is never done!