0 Tree huggers have got it wrong!

"It is often forgotten, by those who so object to management, that all they hold dear will be lost forever and they do not appreciate that preservation is not conservation"

Woodlands in Britain have been managed since the dark ages, in one form or another, and the words 'non-intervention management' are a complete misnomer, the very fact that we exist on the edge of the woodland has a significant impact on the way it would naturally develop.
Trees in the British Landscape

In approximately 11,000BC, after the retreat of the ice age, much of Britain gradually became colonised by trees and, without the constraints of grazing, the country became almost completely covered in wildwood.

The country comprised five main woodland types, the far north of Scotland being birch, below which was what is now known as The Caledonian Pine forest. Then, progressing south as far as the Humber, a forest of oak and hazel (this type of woodland also prevailed in the majority of Wales, Devon and Cornwall.) Further to the south and covering a significantly large area of Lowland England were lime woods and, to the southwest tip of Wales, a forest of elm and hazel.

Whilst some of the characteristics of these woodlands remain today, many have changed mainly due to man's intervention. From the Mesolithic Period, human clearance of the ancient woodland began in the heathlands to provide grazing. The practice continued through the Neolithic, Bronze Age and early Iron Age. It is thought that, by 500 BC, half of England had ceased to be wildwood and that the lime woods had particularly suffered from the expansion of agriculture.

As early as the Neolithic period, coppicing was the key to woodland management, the re-growth in the form of poles being the main construction material of the period. As man domesticated animals, the practice of pollarding was adopted in order to raise the crop above browsing level.

The Doomsday Book (1086) accurately measured that 15% of England was woodland, compared with just over 5% by 1500. By 1086, almost all woodland in England was managed. By 1200, much of the modern landscape of the British countryside was recognisable. Nearly all of today's villages and hamlets existed then; the main areas of farmland, moorland and woodland were not markedly different from what they are now, even though the proportion of woodland was three times greater.

The early middle ages saw the extensive creation of private parklands. By 1300, it is estimated that there were around 3,200 parks in England covering 2% of the country, with roughly one park in every four parishes, and that they contained 25% of the country's woodland.

Although the park tradition declined during the later middle ages, in the very latter years it was revived. Henry VIII created seven parks, including the present St. James and Hyde Parks and the two great parks at Hampton Court.

A revival of the parkland landscape tradition occurred in the 18th century with the instigation of professional landscape designers, William Kent (1684-1748), Lancelot (Capability) Brown (1716-1783) and Humphrey Repton (1752-1818). Their schemes varied from formal gardens, normally adjacent to the house, to the larger parkland landscapes for which they are commonly associated. These often involved enhancing the existing landscape with additions rather than radical transformation. Much of their work involved limited alterations to an existing landscape - removing an avenue, adding a lake, bisecting a wood to open up a vista and planting a belt of trees around the boundary.

Although hedges and hedgerow trees were in evidence during the middle ages, the open field strip agriculture system formed the greater part of England's landscape. The enclosure acts of the 18th century saw a transformation of large tracts of the English countryside - between 1750 and 1850, probably about 200,000 miles of new hedgerows were planted, at least equal to the previous 500 years. Hedgerow trees thus became a major feature of the landscape.

As you can see, what is now considered the 'natural' British landscape is, in fact, a landscape of man's doing and, if we are to maintain what we have grown to love, then management is essential to ensure sustainability.

When designing or managing woodlands on a golf course, consideration should be given to the shape of the woodland edge in relation to the golfing strategy of holes. Trees can benefit the strategy of a golf hole in many ways. They can be used to frame a fairway, which cannot be seen due to the topography of the site, and can emphasise a dogleg hole by exaggerating the orientation of the fairway or strategically to add interest by creating a heroic carry, which, if negotiated successfully, will reward the player with a birdie opportunity. Tees set into woods create the feeling of seclusion or screen unsightly views. Woodlands can also coalesce, making a fairway appear narrower than it actually is. 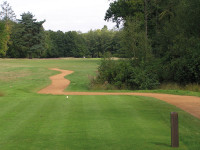 However, trees form a strong three-dimensional hazard, which can easily destroy the intended strategy of a hole if planted in the wrong place. Trees are a dynamic entity, increasing in size over time, often encroaching on to holes. Care must, therefore, be taken not to simply think that a tree is an appropriate replacement for other hazards such as bunkers, as the ability to play from behind an 80ft tree is somewhat limiting and therefore negates the skill element of the game, unlike a bunker, which allows the better player to expound his skills by playing a heroic shot.

With this in mind, trees generally should not be planted adjoining landing areas, but should be positioned between the landing area and the green in order to allow a recovery shot to be played by those who are capable.

Another common mistake made by clubs is to use trees to force a dogleg, when, in fact, the strategy laid out by the architect was to tempt players to take on a heroic carry. Though, with modern technology, the challenge may now be diluted, the use of trees in this situation is often incorrect as the same shot is forced on players of all ability. Playing a 6 iron from a tee to a wide fairway, because the dogleg is forced, is uninspiring for all levels of golfer, and removes the essence which goes to make all good golf holes; the mental and physical challenge of deciding, then playing, the correct shot from the tee.

The basic understanding of golf course design is something which most golfers do not understand or even have an interest in, and perhaps we all expect too much from the average member. After all, he is there to get away from life's toils and relax, so why should he get involved with the side of the game which he only has a passing interest in and which, as we all know, can be a political hot potato.

Perhaps golf course architect Tom Simpson best summed up the true situation; "Most people appreciate and have some understanding of a lovely landscape, but not one golfer in a hundred knows a good hole when he sees it. He may like the hole or dislike it, but that has nothing to do with whether, in fact, it is good or bad."

Trees and the Golf Course

Woodlands will regenerate, either on their edges or within natural formed clearings in the forest. Woodlands will, therefore, readily invade areas of unmown rough or on heathland courses in order to reproduce. It is, therefore, essential to have a management regime in place to control the spread of regeneration into areas where it is undesirable. 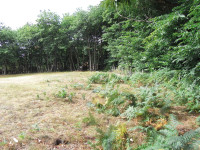 Even links courses will suffer invasion if correct management prescriptions are not in place; hawthorn or birch will normally be the first pioneers by the coast. However, in certain areas, introduced species such as White Poplar and Sea buckthorn are major problems, especially as they reproduce through suckering from their roots and will even attempt to invade the putting surface, as witnessed at Royal Lytham and Seacroft.

These species also have the intrinsic problem that, when trying to remove them, any vegetative material, however small, which is left within the soil will attempt to produce a new plant. It is, therefore, necessary after removal to implement a programme of weed control for any suckers which appear.

Unfortunately, since the old greenkeeping practice of burning the rough or heather in the autumn was banned, no alternative prescription has been adopted, allowing regeneration to enter such areas. This has had a devastating effect to the landscape on courses which were once open terrain, commons, moors and heaths becoming woodland - the problem being compounded as the present membership are unaware of the true character of the course, and the present misinformed, but widespread, view that no tree should ever be removed. When, in fact, if these misguided members wish to retain sustainable woodland cover, it is essential that the woodland is managed in order to allow the remaining trees to develop.

However, the first question asked has to be whether trees and woodland are suitable for a particular site, and many considerations have to be taken into account.

Firstly, what originally attracted golf to the site. Often, it was a combination of the land being infertile and, therefore, of little value to agriculture; conversely, the infertility and typically sandy, acid soil which goes with this was ideal for golf, as it encouraged the fine grasses which the golfer desired. This, combined with its free draining nature, encouraged the architects of the golden age, such as Harry Colt, to concentrate on the establishment of courses on the Surrey and Berkshire heaths, which were to become the role models for inland golf.

Unfortunately, the ecosystem of common and heathland has no place for trees, as the grasses are not shade tolerant, as they have never been required to evolve the need, and will, therefore, be lost to the undesirable broadleaf meadow grass and Yorkshire fog as woodland cover increases. A loss to both the ecology and golfing quality of the site.

Heather will suffer a similar fate as trees shade it out, however the long term effect which is most devastating is the leaf litter and the nitrogen fixing qualities of the interlopers that will enrich the soil and create a whole new environment hostile to those precious qualities which attracted the game in the first instance.

It is often forgotten, by those who so object to management, that all they hold dear will be lost forever and they do not appreciate that preservation is not conservation. Nature is a living entity and the pressure we unintentionally put upon it has to be redressed.

Furthermore, the effects of ingress is over such a relatively long period that it often goes unnoticed, and tees can be effectively reduced in size as branches encroach, forcing players to use only part of a tee, often resulting in them being extended into areas which spoil the line of play or effect the strategy. It is an expensive reaction that does not solve the fundamental problem, but is seen to be politically correct!

In conclusion, perhaps the best way to illustrate to the 'Doubting Thomas's' of the club is to take them to an area of heather or fine rough where a tree is situated, and ask them to look what is beneath and say 'do you really want to play your golf off that?'

Finally, a moment of light relief from a club I recently visited, was a notice reading: "The committee, taking account the view of the members, has decided for economy not to advertise the post of course manager nationally, as the club has, within its ranks, at least 450 highly qualified expert agronomists. All applications to be in writing to the secretary."