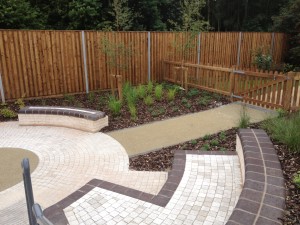 Souters Sports, one of the UK's leading natural sportsturf contractors, has recently completed the natural habitat at Bluebell Park School in Knowsley, Cheshire with an ambitious planting scheme which saw the addition of over 4,000 trees and over 20,000 shrubs, plants and bulbs planted.

The initiative was part of an environmental commitment that has seen the implement of an on-going conservation programme at the school. The contract was won by tender and also included distributing top soil to various areas for planting, seeding and also raised plant beds, soft landscaping and drainage of the existing sports fields.

Working alongside main contractors Balfour Beatty, Souters Sports in-house team oversaw the planting of over 20,000 trees, shrubs, plants and bulbs to a variety of areas.

"We've worked with Balfour Beatty on numerous projects in the past", said Souters Sports Contracts Director Robert Heath. "We've recently completed eight sportsfield projects across Merseyside alone working with them so we have a good working relationship.

"This project wasn't without its challenges, but rather than the wet weather which hampered so many other projects last year; it wasn't the case here. We had a tight timescale to complete the planting and access was very restricted with the school being kept open throughout the project".

Communication was also key factor with all contractors involved in keeping the project on schedule. Robert explains: "The species of plant changed several times throughout the project because of concerns with allergy or the students eating them.

We had a close liaison with Balfour Beatty, the Architect and the school to find alternatives which were safe to the students. Also, the specification of trees changed which meant the size of them increased to meet strict planting regulations".