0 TREES, HEDGES, BIRDS AND THE LAW

At this time of year our thoughts turn not to the birds and the bees, but the birds and the trees. We, therefore, make no apologies for reproducing, as a timely reminder, advice on the legal status of birds in Britain.

The Wildlife and Countryside Act 1981 is the principal legislation that has to be considered. It was enacted partly as a result of the Wild Birds Directive (79/409/EEC) and has been amended by the Countryside and Rights of Way Act 2000*. The legislation makes it an offence to kill, injure or take any wild bird and to take, damage or destroy any nest that is either in use or being built. It is also an offence to take or destroy wild bird eggs of any species. In addition it is an offence to possess or sell any bird or egg that has been taken from the wild anywhere within the European Union. 'Wild birds' are now defined as being any species of bird naturally occurring in the wild state in the European Union Member States. (The Game Acts give full protection to game birds during the closed season.)

The Wildlife and Countryside Act also gives the same protection but with special penalties to the 79 species of birds listed in schedule 1 of the Act (see over). In addition any person who "intentionally or recklessly" disturbs a listed bird whilst it is nest building or is on or near a nest containing eggs or young, or disturbs the young will have committed an offence with special penalties. 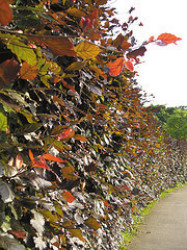 This means that tree work and hedge cutting should not take place if there is a risk of the work, or its effects, being harmful to resident birds. Therefore it is recommended that major pruning and laying of hedges is done during January and early February, that is after birds have eaten the berries and before they start to nest, and that light hedge trimming is avoided between March and August. However, if a hedge has to be trimmed at this time it should be inspected carefully for active nests and, if found, work should be delayed until the young birds have flown. If, despite best efforts and 'Sod's law' rules, a nest is found after work has started, a buffer area must be left inviolate, around the nest, until the 'all clear' is sounded.

There are, of course exceptions to the no works recommendation. An authorised person, someone who has the written consent of the owner or occupier, may fell or prune a dangerous tree in order to preserve public health or safety provided there are no schedule 1 listed bird species affected. However, the safety option should only be exercised in emergency situations and even then it is recommended that independent legal advice is sought. A licence may be required for tree work that is necessary for justifiable reasons other than safety. The licensing authority (see below) will give guidance on the need for and availability of a licence for works specific to trees.

Accidental injury, killing or disturbance of a bird as a result of a tree work operation, for which permission has been granted under a statutory provision, would not necessarily be an offence provided it can be shown that the harm could not reasonably have been avoided.

There are now no birds listed on schedule 2 Part II of the 1981 Act - all species are now protected. The thirteen species that could be killed lawfully in the past - such as Starling, Wood Pigeon and Magpie are now protected. A series of General Licences, issued annually, now exist to enable necessary control of these species in specific and very limited circumstances.

In Wales, the National Assembly for Wales issues licences and applications should be made to the Nature Conservation Branch, Environment Division, Welsh Assembly Government, Cathays Park, Cardiff CF10 3NQ. Tel:02920 823363.

Oh yes, and don't just think birds. Remember all the other creatures, such as bats, dormice and Red squirrels that are associated with trees and have similar protection.


See the rest of the information on the following link :-Tree Advice Trust