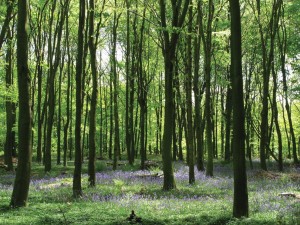 Forests with dense canopies create a microclimate that protects a variety of cold-adapted plant species from warming air temperatures, a study has shown.

Researchers found plants that favoured cooler conditions fared better under dense canopies than in ones that were more open to the elements.

They added that these conditions could be a "critical mechanism" in the conservation of forest plant diversity.

The findings appear in the Proceedings of the National Academy of Sciences.

A team of international researchers, headed by scientists from Belgium, noted that previous studies had shown that "biological signals of recent global warming" had been increasing across an array of ecosystems.

"Around the globe, climate warming is increasing the dominance of warm-adapted species - a process described as 'thermophilisation'," they observed.

The team gathered data from vegetation survey from more than 1,400 plots in temperate forests across North America and Europe.

In each plot, they compared the results from an original survey with a repeated survey that was, on average, carried out 34.5 years later.

The results showed that there had been a sizeable turnover, with about one-third of the species present in the original survey being replaced by other plants.

However, they also found that the thermophilisation of vegetation was lowest in forests where canopies had become denser.

The researchers explained that these conditions also offered protection to forest herbs and tree seedlings from summer drought, "decreasing mortality and thus buffering the impacts of large-scale climate change".

They noted that in western Europe, a number of factors - such as

Allowing forest canopies to grow over could help some flora species cope with rising temperatures.

See the rest of the article on the following link:-BBC