0 Trefloyne Manor - a “field with flags in it" transformed

Pembrokeshire is still one of the most popular visitor attractions for the English, with second home owners often choosing this picturesque corner of Wales to retire or holiday .

Pembrokeshire's association with England is rooted in history as a once strategically important area for ruling authorities, notably Tenby, a walled seaside town on the west side of Carmarthen Bay.

Trefloyne Manor, one of the area's youngest golf courses, has been steadily growing its profile since the almost agricultural site was taken on by its current owners and brought up to speed to meet the demands of the modern golfer.

The eighteen hole course is fast gaining a good reputation in West Wales. Despite being just sixteen years old, it has matured exceptionally well since its re-design in 1996, and the extensive annual winter programmes, put in place by new management, have allowed the course to progress and develop within the parameters of today's environment, and in spite of the sodden Welsh conditions.

Trefloyne Manor sits on the outskirts of the tiny village of Penally, overlooking the 2.5miles of sandy beach at Tenby. The 600-acre estate is steeped in history. The former farm and quarry [the course was laid out over the underlying limestone] traces its roots back to the 1600s when Oliver Cromwell reputedly brought his army to this rolling land to rest and recuperate.


Inheriting what was "a field with flags in it" in 1996, Gareth Knight, Golf Course Estates Manager, was a member of the Celtic Manor Resort greens team for the 2010 Ryder Cup, who were universally acclaimed for their efforts during some of the worst weather ever to hit Wales. He is active in BIGGA's South Wales Section as secretary, and their South Wales, South Coast & South West Region as vice chairman.

Originally a working farm, the land was previously owned by Aberystwyth University, who ran it as a crop trialing site for daffodils and potatoes. Much of the history of the site is scattered across the 600 acres. A magnesium limestone quarry at the 13th green, once used as a store site, is just one relic of its past ownership.

The course is built on a thick band of carboniferous limestone, which underlies the relatively low-lying ground of the Ritec Valley. On top of the bed of rock sits a layer of the region's famous red Welsh clay, with just one to three feet of soil on top of that. 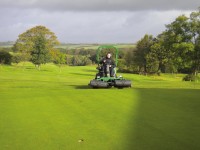 This corner of Pembrokeshire offers a real multitude of geological landscapes and natural resources, which is probably why it was earmarked for quarrying in the first place.

HF Gilman & Co, a Welsh supplier of quarried products, purchased the land from the university with a view to making good the leisure potential it offered, so was the first to attempt to transform the estate into a decent sports facility. It was evident, when the new owners took control, that much work was still needed to transform the course into an acceptable and commercially viable golf resort.

Until you have a chance to see the full spread of the estate, it's difficult to appreciate just what a mammoth task it is for Gareth, and his modest team of three full timers, to manage every aspect of the historic former quarry.

The Ritec Valley is also of special European conservation interest, as one of only ten wet woodlands across the continent and, as such, has been awarded the status of Site of Special Scientific Interest (SSSI).

The archeological importance is also such that it has merited numerous archeological digs over the years, unearthing some notable finds to boot. A cannonball was found stuck in a tree behind the manor house, and the remains of an abbey has also been discovered near the 12th green, with a secret tunnel leading from it back to the manor house. 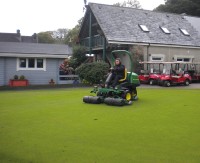 Working in often severe climactic conditions, with wind, rain and snow commonplace, every cut counts for Gareth and the importance of machine reliability cannot be overstated, he stresses. A recently purchased John Deere 2500E hybrid mower is the latest addition to the shed.

Hybrid technology has become commonplace on courses around the UK, with the promise of delivering quieter, more cost effective and environmentally friendly greens mowers.

"Efficiency and consistency are paramount when budgets are tight," says Gareth. "But, for me, the biggest impact has been the reduction in hydraulic oil leaks."

Gareth has also worked hard to ensure that the course is environmentally sound. "We have a biomass boiler, log burners and rainwater harvester for use throughout the estate," he explains. "When you get as much rainfall as we do, it's foolish not to make good use of it! Recycling is important, too. From the course to the kitchen, we aim to be as commercially green as possible, even down to sourcing as much local produce as we can."

On the course, Gareth is an advocate of organic granular and liquid fertilisers, yet he's not one for spraying unless he needs to. "The organic feed helps to keep the bug count up and it's a goal of ours to build up an eco-system in the soil. The product I couldn't live without now, though, is Primo Maxx, it's been a godsend for our turf," he reveals. "It has reduced our overall maintenance quite dramatically by spraying on tees, greens and approaches. Before I started using it on the greens, I was cutting every day in the main season, but I have now reduced that to four times a week. I've also introduced rolling; it's saving me time and reducing wear and tear on my cutting units."

Trefloyne Manor has taken giant steps since the establishment of the golf course on site, and their hosting of its first PGA event in 2010 is arguably their proudest moment. Also, by forging links with the Welsh and Dyfed Golf Unions, Trefloyne has built on its membership and visiting fan base year on year.

Trefloyne has also, in the last five years, been used as a venue to host the PGA West Region championships and county and regional level competitions. There are plans to construct a new driving range (due to open later this year), with twelve covered and two open bays, alongside a new academy with training tees and greens; improvements that will bolster their already growing reputation.

Gareth is also embarking on a programme of turf improvements by reducing the volume of fescues in the mix and introducing more bents, in an attempt to improve the putting quality on the green.

Despite his ambitious long term goals, Gareth is under no illusion about how far the quality of the course can go, and is happy to maintain the good level of provision so far achieved, insisting that he is more concerned about creating a community 'golf for all' philosophy.