3 Trials and testing at Southampton

Trials and testing at Southampton

It has been a season of upheaval in terms of the managers at the club. First Gordon Strachan left and was replaced by Paul Sturrock, now we have Steve Wigley in charge. As I write we've had 26 uses on the St Mary's pitch including training sessions and last weekend's match against West Bromwich Albion and so far this season and if I hold my hand on my heart, the pitch doesn't appear to be as good as it was this time last season. I have been reviewing my notes from last season to see what we've done differently and all that I can point to is that weather patterns have been very different this year to last.

It has been a lot wetter of course this year, and looking at my fertiliser applications, I have had to increase the rate of feeds this year to counteract leaching in the rootzone. I take my figures based annually and last year I had applied a total of 250kg of Nitrogen, 100kg of Phosphor and 430kg of Potassium per hectare. This year we're already up to 360kg of Nitrogen. The level of Phosphor has remained the same and at the moment I have applied 300kg of Potassium with one more controlled release Potassium nitrate application to go before the winter truly sets in. This should see me through until the spring.

If I am asked to describe the pitch, I'd say that the root growth/depth is fine, but the sward itself seems to be less dense than last year. I have changed grass species, but I used the same mix at the training ground and the pitches there seem to have much thicker swards, with the plant leaf looking broader and more upright in growth than at the main stadium. The leaf tip of the grass in the stadium appears to be hooked, so I have sent away some leaf tissue samples to a laboratory for analysis. We've already had a recent soil analysis done, which didn't throw up anything extraordinary, just slight deficiencies in magnesium and potassium. 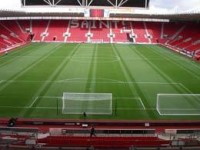 I'm hoping that the tissue analysis will find something that the soil analysis didn't, primarily so that I have a firm reason to the grasses visual deficiencies and can react to it. If nothing comes from the results, then I'll be left surmising as to why it hasn't responded so well this season. It is possible that we have a toxicity building up in the surface layers, this we will have to deal with by using a flushing and neutralising programme.

I have used Poa supina and Poa pratensis on my pitches with a mix of Rigby Taylor's R14 Rye grasses. During the renovation of the St Mary's surface in May, there were eight bags of R14 and four bags each of Poa supina and pratensis used. I have the Poa varieties pre-germinated, and then hand mix these with the Rye seeds before spreading them on the pitch surface using the SISIS Variseeder. The pre-germinated seed is a bit sticky and can prove difficult to spread but by mixing in advance with the dry seed and using the machinery stated, we had a good even spread and a good take on the new seed. Both the Poa's, particularly the supina are very much in evidence. I have discussed the options of oversowing the Poa's earlier than the Rye grasses to allow them time to establish, but the reality of a short close season doesn't really give me that luxury, so all the seed goes down together.

Although the Rye grasses establish quickly, I've found that the Poa has usually sent down a root and it's first leaf and manages to find a place for itself in the sward. When the season starts the Ryes seem to be in control, but if you look closely you can see the Poa's in the base of the sward. As the season progresses the Poa's come into their own and as we move towards the winter they are more dominant than the rye grasses. The main quality I find, using the Poa's is that Poa supina in particular, starts spring growth very early and if I am cutting the pitch in January/February it will be Poa supina that I'm trimming back. The Poa is very invasive and where the Rye grasses get kicked out, leaving scars, the Poa quickly re-inhabits the space left. It does require management with regular use of the verticutter, scarifier and Koro at the end of the season, but provides good playing characteristics and retains the visual aesthetics required for a Premier surface. 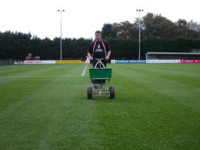 Some people argue that Poa supina is very similar to poa annua, but to my way of thinking, Poa annua is very likely to invade your pitch anyway, so why not have a more aggressive form of Poa in there already. Because we have a good even spread of all our species, I don't tend to have blotches of poa in the sward, all that I would say, is that the general colour is more of an apple green than an emerald green.

We have had a reasonable autumn, but growth seems to have slowed down considerably, maybe we haven't as much sunshine as the grass and me would have liked. With the increase in Nitrogen feed you would expect more bursts of growth, but the opposite has happened. Our cultural work hasn't changed much either. We are still looking to aerate the pitch every week in one form or another. We tend to vary between the SISIS Quadraplay slitter, The Mustang or the Soil Reliever. These three machines provide a range of depths so no panning can take place and air is able to get to all parts of the rootzone. I bought the mustang aerator because it's a fast machine that allows rapid aeration at depths up to 150mm. When Gordon was training on the pitch three times a week, it was a handy tool to open up the surface that took just a few hours in the afternoon to complete.

I have used the verticutters lower this season, than in previous seasons, and maybe this is a reason for a thinner sward. Throughout the summer and autumn, I had the machines set at 1mm above the surface. I do this to manage the Poa in the sward, stopping it clumping up, and removing vegetation that is dying back. Now I have lifted the reels to cut at 4mm above the surface and will keep to this setting until the spring. I tend to just use the verticut around matches. But sometimes I may use the rotary mowers instead after a game to remove surface debris. I keep a note of how much grass is mowed or verticut from the pitch and at the moment we're taking off about four to five boxes of grass following training sessions or games. An interesting point is that I use these figures to go back to our management and say that wear is now overtaking growth, so they can expect the pitch to start going downhill. Using these figures substantiates my argument and helps the club understand why winter training sessions will only be detrimental to the playing surface.

There is some wear in the goalmouths, which is to be expected, but I am continually over seeding these areas and using my growth lights when there is time to set them up on the pitch. 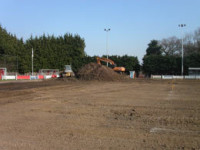 At Southampton's training ground facility we had our 'stadium' pitch refurbished in the summer by Kestrel. The construction was finished in June, though we kept all the players off the surface until the 1st October. The pitch was re-built on a new gravel carpet, with 50% topsoil and 50% root zone laid over the top. These two layers were partly combined using a Blec stone burrier, to help with nutrient retention in the upper profile. Once the rootzone was partly combined and regarded/consolidated, they put in sand slits at 600mm centres to go down to the gravel carpet. This pitch is used nearly everyday by the teams and they love it. I'm worried that I can't keep them off it, but the pitch is responding well.

The other pitches at the training ground were renovated by ourselves and Kestrel used the Blec Sandmaster over them to link up last years sand banding that they did. Again these pitches have been performing admirably so far this season and drainage has been excellent.

There is one other possible reason as to why the training ground 'stadium' pitch looks so much healthier than St Mary's and that is a series of extra sprays that we incorporated into our nutrition program. Using some Symbio products, which we made up overnight to produce compost tea's, we sprayed weekly through the main growing period in the summer. The grass certainly looked healthy and vigorous, and having trialed these products here, may well look to use them in our program next season at St Mary's. It's worth noting that the training ground enables us to trial these sorts of products before having to take a chance in the main stadium.