Mark walkinton explains how trials set up by ADAS prove that tree growth can be significantly reduced by using a tree growth regulator with no adverse phytotoxic effects.

Electricity supply companies are required by law to keep their overhead power line networks clear of interference from trees and other vegetation. The majority of the trees that interfere with power lines are on private land. In many instances landowners only allow contractors to cut tree growth back to the minimum distance required by legislation rather than allowing the extent of cutting required to maintain the clearances for the duration of the cutting cycle, which can be between three and five years. This means that the electricity companies must have their contractors return every year or every other year to ensure that clearance is maintained and this is very costly.

In 2009 a trials project was set up by ADAS in association with the Bartlett Tree Research Laboratory on behalf of a number of the major UK electricity distributors (UK Power Networks, SSE, WPD and Northern Powergrid) to investigate the effectiveness of using the growth regulator (TGR), paclobutrazol (PBZ) to control tree growth and thus reduce the necessity for costly annual maintenance visits. Six experimental sites were selected throughout the UK and a range of the quicker growing trees common in the UK were treated in early summer 2009. Each site contained test and control trees, and following treatment of the test trees, all the trees were pruned. The rate at which the test and control trees re-grow has been measured each year. Three of the planned five years of monitoring the effects of the TGR on tree growth have now been completed. 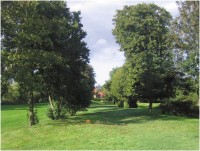 The monitoring to date shows that PBZ causes no phytotoxic effects in treated trees of all species across all six trial sites. All treated trees have shown reduced shoot extension growth and trunk diameter as compared with untreated trees in both 2010 and 2011, with a greater growth reduction being recorded in 2010. This is not unexpected - the rate of shoot extension growth reduction is expected to decrease over time due to possible degradation of the PBZ within the tree tissue. Results to date also indicate that some tree species are more sensitive to PBZ than others, i.e. oak and beech being the most sensitive with reductions in growth as compared with untreated trees ranging from 40-70% over 2010 and 2011. Other species such as poplar and willow have to date proved less sensitive with reductions in growth ranging from 2-32%. There are also some initial indications that there may be some variation in the effects of the TGR between trials sites.

The trial has two further years to run. The results to date are promising and indicate that the application of the TGR has a significant effect on reducing tree growth with no adverse phytotoxic effects.

The project is a collaborative one between ADAS and Bartlett Tree Research Laboratory with support from Syngenta Crop Protection Ltd. For further information contact the project manager Mark Walkinton on 01924 848520 or email mark.walkinton@adas.co.uk.