0 Tricure AD helps out when Mid Kent feels the heat 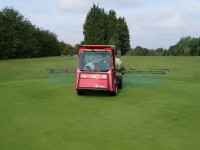 Experiencing summer temperatures up to 5° higher than daily maximum forecasts for Northern England and some of the South, Mid Kent Golf Club provides an exacting test for a wetting agent. But Course Manager Lee Sayers comments: "To coin a phrase, Tricure AD does exactly what it says on the tin, and what's more it is consistent and reliable, unlike some cheaper wetting agents on the market."

The chalk downland course was built in 1909, and topsoil varies from 100mm to 2m depth over the chalk, so it is free draining and can dry out quickly.

Greens are well-built, however, with 200mm of topsoil also benefiting from 102 years of topdressing to produce a more forgiving growing medium for the turf.

When Lee joined the Mid Kent Golf Club nine and a half years ago, a different wetting agent was in use, but with good experience of Headland Amenity's products from his previous club, he soon switched to Tricure, and when it became available, Tricure AD.

It is applied from the spring onwards, in a tank mix with Headland Amenity's biostimulant Turfcomplex, and Lee says that he gets great results.

"We have had no problems with dry patch since using Tricure AD, which is useful as it can be a real issue on these soils. Greenkeepers can find the soil hard to wet, however much they keep watering."

Lee commences his programme in March to ensure that the rootzone is receptive to irrigation or rainfall in the crucial growing season, starting at 10l/ha.

"In the cool summer of 2012, I continued at this rate, although I will usually increase it to 12l/ha in June to August, and drop back to 8l/ha in September as temperatures drop, and the flexibility to use Tricure AD at different rates is a real plus. The early start was particularly appropriate last year as we were watering at full bore by March," he explains.

Tees also get four applications from May onwards, and in 2012 Lee started using Tricure AD on fairways, at a rate of 5l/ha.

"It was a tricky year to evaluate the product on fairways as there was such a lot of rain. We can have huge puddles form but they are gone the next day."

Indisputable however, he points out is the ease of use and safety of Tricure AD. "There is no risk of scorching, which could be a problem with some older products and it is so simple to use - we just spray on and water in. I wouldn't swap it."