0 Tried and tested in Leicester 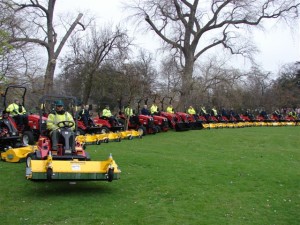 Little did Geoff Lake, the now retired former Area Parks Manager for Leicester City Council know, in two thousand and nine, when he first added Shibaura compact tractors with Muthing flails to his equipment fleet, he was sowing the seeds of a long term relationship and the continued growth and product development of the brands within the UK professional groundcare sector.

Recently through the Platt Harris, Tuxford dealership, as a part of their fleet maintenance replacement programme, the council have upgraded, again majoring on both products.

Pete Bagguley for Platt Harris said, "the main emphasis with this latest order is on the Muthing flails. Given the need to cut less frequently Leicester have certainly noticed the benefits afforded by the flail when compared with a cylinder and the Muthing flail is an extremely versatile piece of equipment for a range of amenity tasks.

Simon Richard, the UK agent for the Muthing flail range and UK Sales Agent for Shibaura commented, "Initially the authority dealt with Mitchells Groundcare in Coalville, on a contract hire basis.

A few years later they decided to opt for outright purchase. They found their operators enjoyed working with the Shibauras and Muthing flails and both performance and reliability was second to none, with just one clutch replaced in a five year period.

The first order was for nineteen Shibaura power units, made up of fourteen 35hp Shibaura CM374's, four Shibaura 33hp ST333's and one Shibaura 24hp ST324, all with Muthing flails.

Bryan Elverstone, one of the groundcare industries most highly respected members who passed away in autumn 2013 was the Mitchells dealership contact with Leicester City Council at the time and the man responsible for establishing the firm relationship with the products the council now has. 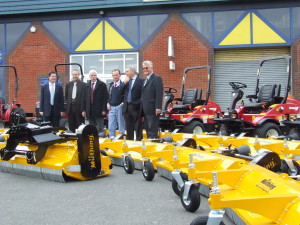 er City Council Parks Services, Area Parks Manager, David Flavelle says, "prior to placing our order in two thousand and nine, we had the opportunity to test the Muthing prototype flail and, based on our particular requirements, work with Michael Muething, the company owner, to develop a modified design which became the basis of the current Muthing groundcare range."

Michael Muething added, "We liaised with Geoff Lake and his groundcare team, plus Bryan Elverstone, Pete Bagguley and Paul Beckett to develop the product which resulted in the Shackle M Carbide flail we now offer, with superior cut quality, resistance to debris and longer working life."

Dave Flavelle continued "Like all authorities we are working within tight budgetary limits and need to be sure we are making the right decisions where our equipment expenditure is concerned.

Prior to placing this latest order, we did compare other power units but the Shibauras came out top again and we had no hesitation in continuing our long standing relationship with them. We will be working closely with Platt Harris, who also have the service contract, over the coming months.

We get a lot of machine for our investment. Our particular remit includes large areas of housing and highway sites as well as parks and green open spaces, many of which include severely sloping terrain.

The Muthing decks are a very robust product and cope well with the demands we put on them. We can cut with just one pass which saves us time and fuel.

The Shibaura CM374's rating for up to 20 degrees and superior road speed make them ideal for our purposes. It is vital we demonstrate to the tax payer we are serious about providing the right equipment for the maintenance of our open spaces, to the required standard, while also addressing budgetary and operator health and safety issues.

For us the Shibaura and Muthing combination has proved to be a reliable and economical solution with the added bonus that our operators love working with them.

For the maintenance of areas where working angles can reach thirty degrees we use the Shibaura 28hp diesel SG280 Slope mower. We were the first UK authority to trial it and knew immediately that it would be replacing our previous specialist machine.

More importantly it was within the limited budget that we had at our disposal. Operator comfort is well catered for with low noise and vibration levels, fully adjustable horizontal rolling seat to compensate for working angle and a twenty six litre fuel tank for more efficient working.

The SG280 weighs in at just 890kg with 443kg to the front and 447kg to the rear and this 50-50 weight distribution, with the 1500mm wheel base and low centre of gravity delivers the stability and safety we demand for our operatives, when at work on steep inclines" 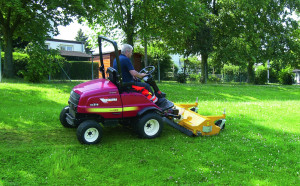 tor range says, "The Shibaura professional brand is recognized for delivering added value and we have seen sustained year on year groundcare growth in the UK"

Simon Richard concluded, "At the time of the first order through Mitchells the Muthing flail range was relatively unknown within the UK and I feel the long term association with Leicester City council has played a major part in their establishment as a force within the UK groundcare sector.

Thanks to the efforts over the years of Bryan Elverstone, Paul Beckett and Pete Bagguley, both of Platt Harris, groundcare sales are now established as a major proportion of Muthing's turnover, worldwide and the Shibaura compact range is firmly established as the versatile power unit of choice for the professional and amenity user"