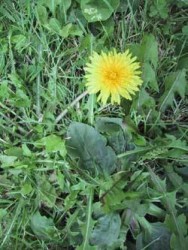 As broad-leaved weeds begin to flourish this month, there are signs that more and more turf managers are relying on the tried and tested. Four of them, with golf courses north and south of the M25 will apply Headland's selective herbicide, Relay Turf, some of them tank mixing with Xtend Fine, (the company's soluble slow release fertiliser) as a weed and feed combination. 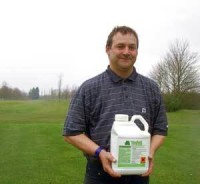 Nick Birchill, head greenkeeper at Weston Turville Golf Club near Aylesbury, Buckinghamshire has been using Relay Turf on his 18 hole, parkland course for the last three years, following a recommendation by his previous manager at another club.

"Every other year we get the contractors in, in May to spray the whole course," he says. "They can blitz it in four hours, when it would take a week if we did it ourselves. I've got Relay Turf in stock and I'll use it to treat daisies and dandelions. We used to have clover, mostly white, but last year it was eradicated. Relay Turf does what it says on the tin."

Peter Blackley, course manager at Stapleford Abbotts Golf Complex in Essex has two 18 hole and one 9 hole course under his wing, and his nine greenstaff can be quite stretched. He applies Relay Turf annually in May and usually finds that this is enough. "We might have to do a repeat on the yellow suckling clover in the rough but this will be more of a spot treatment if anything," he explains. "We'll just do it throughout the season as the problem arises. We've found the product as good or better than any, and the application rates mean that it works out cheaper."

Spencer Haines, who has been greenkeeping for 15 years and course manager at Hartley Wintney golf club on the Surrey/Hampshire border for the last three, admits to not having a great budget. His 18-hole course is built on a mixture of gravely bagshot sand and silt over clay. "We used to have a lot of clover on the bagshot sand areas and we get broad leaved weeds such as thistle, dock, dandelions and a fair bit of chick weed on the nine holes which were constructed 5 years ago," he says. Spencer has been using Relay Turf since his days as deputy course manager at Sandford Springs golf club, and now mixes it with Xtend in a combined weed and feed app 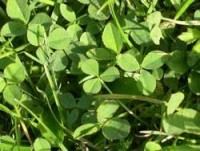 Paul Shelley, course manager of both The Bedford golf course and The Ouse Valley golf course at Biddingham just outside Bedford mixes Relay Turf with both Xtend, for a slow release feed, and straight Urea for a quick pick-me-up. "I apply this mix to all tees, surrounds and approaches on The Bedford," he explains, "and Last year it got nothing else due to the weather. It's 7 years old, built to USGA spec on sandy gravel that's almost ballast and by the middle of May the whole course was brown." This year Paul has applied a base feed to get the course through to the middle of May and will then revert to his normal Relay Turf, Xtend and Urea application. He will follow up every 4 to 6 weeks with a Urea, Xtend and Sulphate of Iron mix until the beginning of August. By comparison, the older, clay based Ouse course will just receive a little bit of Xtend, with Relay applied to the tees and surrounds. "The grass just grows," Paul declares. "Its been fertilised like mad for 100 years."