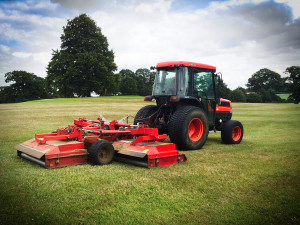 Set in 225 acres of a picturesque landscape, amongst 300 year old ancient oak and sweet chestnut trees, with the beautiful River Avon flowing through its centre, Stoneleigh Deer Park Golf Club blends naturally into the peaceful countryside. It is for these reasons that course presentation is extremely important to the club, so when their self-propelled mower broke down, a replacement was needed and fast. But it couldn't just be any machine; a mower was needed which would match the requirements of the prestigious golf club.

"Before their old machine packed up I was already talking to Richard at Stoneleigh about the Trimax Snake. I was adamant the Snake would be a better all-round mower so we arranged a demonstration.

"Then, all of a sudden he came to me and said that the machine he'd been having problems with had finally given up the ghost and asked if there was any chance we could get something sorted immediately," said Richard Lucas.

Convinced he wouldn't be disappointed with the Snake, Richard spoke with Trimax and explained the situation. With their philosophy of endeavouring to treat all customers, staff, suppliers and partners as family, they were eager to get the club back up and running.

Richard at Stoneleigh agreed to purchase a Trimax Snake despite not having seen it in action. Within a week Richard had taken delivery and was back out cutting.

Choosing the Snake proved to be sound advice for the greenkeeper, who has been at the club for nearly sixteen years, and as Richard believed - he was far from disappointed.

"It's the first Trimax machine that I've used and it's absolutely brilliant. I'd say that the presentation it gives you is its best feature. With the rollers on it you can stripe and make the course look really pretty.

"I think the aesthetic qualities the Snake offers is much better than a ride-on without rollers, which is what we had before. Our old machine served us well for ten years but you just get that extra presentation with the Snake. It is really well built and I would definitely recommend it."

It is easy to see why he is full of praise for the Snake. Launched in 2014, the 3.2m wide trailed rotary mower is the accumulation of over 30 years of Trimax innovation, engineering and customer insight.