by External source
in Local Authority
on 28 Apr 2013 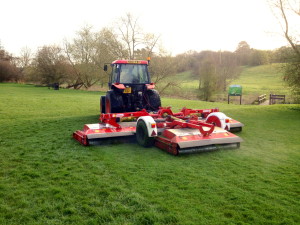 Trimax wide-area rotary mowers have been the principal grass-cutting force on public parks, recreation grounds and playing fields managed by Watford Borough Council for more than six years, replacing trailed hydraulic cylinder gangs without any compromise in the standard or effectiveness of cut.

On the contrary, Trimax mowers have proved capable of dealing with extreme variations in annual grass growth, producing a clean, level finish while spreading the clippings evenly across the working width. Additionally, the Council's move to an all-rotary mowing fleet has brought significant savings in the time and money being spent on in-season maintenance and adjustments as well as end-of-season servicing.

Operating out of different depots looking after the north and south of the Borough, the two Trimax Pegasus S3 493 Classic mowers run by Watford Borough Council are responsible for looking after all larger green spaces within their allocated areas. These encompass more than 25 different parks, playing fields and public open spaces, including two with Green Flag status, national recognition of a well-managed park or open space.

While the Trimax Pegasus mowers concentrate on the larger areas, an accompanying ride-on out-front rotary mower deals with confined and awkward access locations close to fences and borders, play equipment and beneath low tree branches.

Plant Equipment Training Officer with Watford Borough Council, Marcus Potts, pointed out that the two sets of machines are able to complete a mowing cycle in two weeks during a normal season.

"The Pegasus's 4.93m cutting width produces a work rate of around four hectares an hour in optimum conditions, enabling the two machines to deal with a combined total upwards of 45 hectares a day, depending on the distances travelled between sites," he said. "Both Trimax mowers spend four and half days cutting grass each week during the main growing season leaving Friday afternoons clear for regular servicing and maintenance."

Marcus explained that it is council policy to ensure that tractors, mowers and other machines are cleaned, checked and greased all-round at the end of the working week, ready to start again the following Monday. 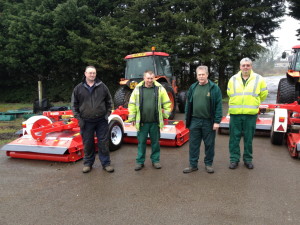 "Giving the operators time to do the job means that it gets done properly and our machines work better for longer with greater reliability, helping reduce running costs and unexpected downtime," he said. "The results paid additional dividends when trading-in our original Trimax wide-area rotary mowers at local dealer, George Browns of Chesham. We'd been advised that there is a good market for well cared-for, pre-owned Trimax mowers and were not disappointed when the time arrived to change."

Apart from ease of servicing, Marcus said that the Trimax Pegasus features simple cutting height adjustment, enabling the operators to alter settings quickly depending on seasonal growth and the specific surface being cut.

"All in all, the move to Trimax in 2007 has proved both beneficial and cost-effective for the Council," he said. "The Pegasus mower operates successfully behind a 62hp tractor, is extremely reliable and, with its 2.5m transport width, can be moved safely from site to site."

"One further notable feature is the quality of the cutting blades. Over a normal season, we will use just two sets which is very good for a local authority encountering a wide range of conditions across a variety of surfaces. From my viewpoint, Trimax produces a first-class mower which is extremely well-suited to public sector use."