by Editor
in Industry News, People, and Machinery & Mechanics
on 14 Jan 2016

0 Trimax Mowers - Fit for a monarch 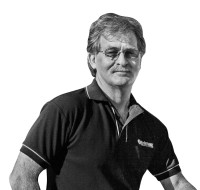 If ever the humble grasscutter were called to greatness, surely it would be to patrol the grounds at Windsor Great Park.

When she looks out on the 20km2 of parks, gardens, woodland and open grassland surrounding her favourite weekend residence, Windsor Castle, Her Majesty the Queen might enjoy the fact that Trimax, which is keeping it all in trim, hails from one of the furthest corners of the Commonwealth, New Zealand.

Trimax founder and CEO Bob Sievwright talks to Pitchcare about how far he's brought the company from its origins in the 1980s, flail mowing the grass under kiwifruit vines in the Bay of Plenty. Now with offices in the UK, US, Australia and New Zealand, as well as distributors across Europe, Trimax has built an unparalleled reputation amongst turf maintenance professionals for cut quality and machine durability

"I'm a farmer's son," says Bob Sievwright. "I grew up on a back country cattle and sheep farm where the main challenge was converting rough scrubland into decent pasture for the animals. My siblings, my twin brother and I worked every hour available after school, weekends and holidays. Most of the pulling on the steep hills was done using horses, but it turned out I was useless on a horse; I kept falling off. So, from the age of about thirteen, I gravitated towards the tractor and farm machinery. The horses knew they were smarter than me, but the tractor always did what I wanted!"

That strong work ethic and an affinity with machinery were two things that would prove critical in Bob's career, as well as the sudden death of his father in his last year of high school. "I realised, at that point, it was up to me to get going and see what I could do. I got myself an overseas scholarship as an Engineering Cadet with General Motors in Detroit, which is where I did my Engineering degree, and learned all about cars and motor manufacturing. I came back in 1974 and got the chance to start my own company." Not Trimax. It would be another eight years before Bob moved into the machinery of grass cutting. Before then, he would hone his business, sales, marketing and export skills making meat hooks for local abattoirs from hardened and tempered spring steel.

An eye for innovation 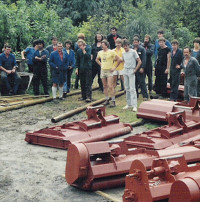 On one of his meat hook business trips in 1981, 33-year old Bob spotted a flail mower with a blade made from two steel pieces welded together. "I sat down and sketched a blade that I knew we could make from just one piece of steel and sent it to the manufacturer. He liked it and we got an order for a thousand blades: my first order for the Gamma flail!"

That particular mower manufacturer bit the dust a couple of months later and Bob's blade deal fell through, but he wasn't fazed. He decided to up sticks, move his business and his young family to Tauranga, New Zealand to manufacture the mowers and the blades himself. He hired a mower engineer (Norm Miller, who still works at the company's HQ today) and went into production. Meat hooks were out and Trimax Mowing Systems was born.

To kiwifruit and beyond

The first Trimax models on the market - Ezeemow, Mowcraft and Mulchmasta - were originally aimed at New Zealand's booming kiwifruit farming industry. But demand soon grew from park groundsmen and reserve landscapers who had heard of the mowers' reputation for durability, quality of cut and low maintenance. In 1985, Trimax diversified into rotary mowers and purchased a complementary mower manufacturing business, owned by Jim McEwen. 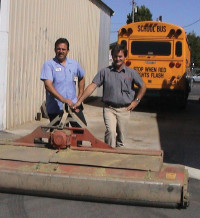 Bob says: "Jim had design skill that I can only describe as an art form. All his mowers looked great and mowed well, so I invited him on board; we worked well as a team and, together, we had easily the lion's share of the local municipal market in New Zealand." Growth by innovation remains a Trimax priority to this day: "Our view is that if we don't stay at the forefront of what we are doing, and push the boundaries of what a product is capable of achieving, then we are standing still."
Critical success factor: customer focus

Jim McEwen immediately set up Trimax's first Research & Development department. He explains the company's success. "We have always questioned the traditional ways and offered a fresh approach to mower concept and design. We produce machines that are aesthetically pleasing, exceed the customers' performance expectations and have a longer life." This echoes the mission Bob speaks of. "As a kid, I always remembered our farm equipment breaking down and how frustrating and costly that was. I can vividly relate to how customers must feel if their mower fails. I have always said that, if any part of a Trimax mower fails, we need to engineer a solution to ensure minimal down time."

Michael Quinn, Customer Relationship Manager at Trimax agrees. "We know our mowers contribute to our customers' livelihoods so, when a mower is not in operation, our priority is to get them up and running again."
Taking Australia and the UK by Stealth

In 1985, Trimax started exporting their pioneering mowers - the Procut and the Stealth - to Australia. All part of Bob's vision: "I was determined we would export and I've spent half my life outside of New Zealand. Part of the design parameter was always that our mowers had to be internationally saleable, commercial quality products that delivered long-term value. Trimax has succeeded where others failed by offering premium products, premium service and always listening carefully to the end-customer. Jim and I have travelled overseas many times, trying to understand what users need in each market." 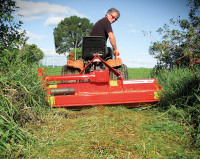 After rotary mower Stealth S1 set a new standard of grass cutting in Australia, it came as no surprise when Trimax started exporting to the UK. Brits loved the Stealth S1 too and, by the end of the 1990s, Trimax had opened their first UK office and warehouse in Northamptonshire.

Trimax mowers were now being used in many prestigious locations, including Windsor Castle and the ten perfect polo pitches at the nearby 130-acre Guards Polo Club.

Everything's bigger in the US

But, not content with cutting the Queen of England's lawns, Bob set his laser-sharp sights next on the USA. Trimax sold its first rotary roller mower there in 2001, opening a distribution warehouse in Georgia in 2005. Tinkering away with America's grand scale in mind, the research and development team launched the X-WAM in 2009, a 10m-wide monster, like nothing else on the market. The scale, reliability and pristine cut of the X-WAM meets the needs and boosts the profits of the country's mammoth turf farms. Just Google Trimax X-WAM and wonder at the size of it.

Trimax had hired its first marketing executive in 2001. Before then, the business attributed its two decades of growth to great salesmen. "We won a lot of customers throughout the 1980s and 90s by demonstrating our products," recalls Bob. "When I started, there were seven other mower manufacturers in NZ. We had to be different and we had to prove we were better. When you're so sure you can outperform your competitors, you have no hesitation doing side-by-side battles. We won them all."

Bob is proud of his products' ability to perform, but acknowledges that today's business environment demands a more marketing-led approach: "We still need to demonstrate as much as possible, but we do that while also sharing the Trimax story."

From strength to strength

There's no sign of success and longevity weakening Trimax's ambition and innovation rate. In fact, each product iteration is said to be getting stronger. 2014 saw the release of the Snake, a fully dedicated sports turf and municipality mower. Customers report that their Trimax mowers have not only mowed tonnes of grass, but also: dirt, two pairs of very expensive prescription glasses, three pairs of earmuffs and several favourite hats, the odd fence, bits of wire, baling twine, a few tools, several pieces of chain, an engine block and a gate!'

An early Trimax model working in a New Zealand orchard

A New Zealand demo day in the early eighties

The 2015 version of Bob Sievwright on the company's new Ezeemow