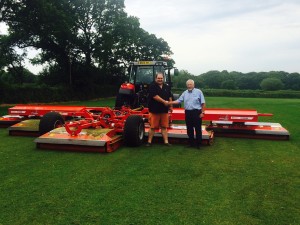 Established in 1987 as a two man operation, Edenvale Turf has gone from strength to strength over the years. As well as a number of contracts with major housebuilding companies, Edenvale also supply and deliver turf throughout Devon, Somerset and parts of Cornwall.

To ensure that the quality of turf continues to be in pristine condition, Edenvale insist on using only the finest turf maintenance equipment. It is for this reason that the company turned to Trimax Mowers and more specifically - the X-WAM.

Described by Edenvale's managing director Steve Light as 'the best mower' he's ever had, the X-WAM is a wide area mower and can be purchased either as a complete unit or as an attachment for the Trimax Pegasus 610 roller mower. It features a huge 10.4m cutting width, a cutting height ranging from 10-110mm and full width rollers for striping, a precision cut, safety and versatility.

The X-WAM has superior contour following abilities based on the unique combination of individual floating decks and articulated axis. It has the potential to cut 33 acres per hour and users will be able perform zero-turns without having to lift any of the mower decks. The X-WAM can easily be folded up to 2.8 meters (9′ 2″) for transport, with the hydraulic wing lift system; something which Edenvale's turf grower Martin White is particularly impressed with.

"We have a lot of narrow lanes here in Devon, so the size of machinery is always an issue with us. If you see some of the lanes that I have to go through, you would never expect us to fit a machine the size of the X-WAM through them. But you can easily fold it up and it's really compact. I don't have a problem taking it through the lanes at all."

Martin goes on to say that "it is not just the ease of transporting the X-WAM which I'm impressed with."

"It's really good and provides an excellent finish. It clears the grass and it doesn't bridge any dips at all. The build quality is the most striking thing about the X-WAM. It's a well thought out machine - simple yet very effective. I would definitely recommend the X-WAM, it is far superior to the units I have used in the past."

"The quality of cut, the speed over the ground and the way it distributes clippings is far better than anything else. The X-WAM is particularly attractive to people who have a couple of hundred acres of grass to maintain.

"There isn't any one thing which is the best feature - it's a combination of things; it is a big mower and it covers a lot of ground very quickly."

Ian goes on to say that "Trimax has been growing for a number of years now and we've been selling a lot of their machines. The principle is the same for all the mowers - they've got a good tip, they thin the grass out and cut cleanly. Coupled by the fact that they've got rollers, they're out in a league of their own at the moment and have been for a while now."