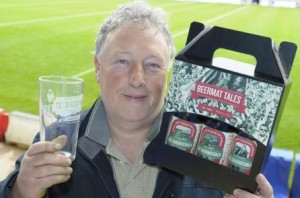 Three men described as the 'unsung heroes' of the Warrington Wolves have had a trio of beers named in their honour.

Groundsmen Jack Hamblett, Roy Aspinall and Mel Jones are the three chosen ones who names don the labels of the latest set of Wire2Wolves Heritage Beers.

The bottles of real ale, which have been created by the local 4T's Brewery, have been titled at The Groundsmen to celebrate the men's contribution to the club over many decades of service.

Father of two Mel, from Winwick, remembered a feeling of shock washing over him when he was told that the club would be naming a beer after him.

The 58-year-old, who has worked as a groundsman for the past 16 seasons, said: "It was a complete surprise. It isn't everyday that you get a beer named after you and to be used in the same line-up as Ockher and Aspinall makes it even more special."

Mel, who counts Warrington Wolves' first victory in the Challenge Cup as one of his highlights, is now looking forward to treat himself to a few bottles of 'Mels' to share with his friends and family.

After more than a decade and a half working for the rugby league team, Mel feels like part of the family and says all the hard work is worth it.

The two men, whose names will appear next to Mel's in the beer line-up, played an integral role during their many years of service.

Groundsman Jack was known by everyone in the rugby league family and was the official kit man for the club but unofficially, he was a friend and confidant to the players.

Jack joined Warrington in 1919 and worked until 1979, spending 60 years as kitman and groundsman before his death in February 1991, aged 86.

Roy Aspinall was known by everybody as Ockher and had been connected with Warrington Rugby League Club for 42 years after becoming Alex Murphy's first signing in 1971.

Roy followed the club where every the team went and his support and dedication never wavered.

The beers will act as fitting tribute to Roy, who died earlier this year, aged 76.

The Wire2Wolves Heritage Beers can be purchased from The Foundation Office by cash or cheque from 9am to 5pm, Monday to Friday.

Each set is £15 and is accompanied by a complimentary Wire2Wolves pint glass.

Article sourced :-This is Cheshire