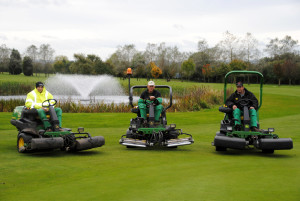 Course manager Andrew Halfpenny of Ombersley Golf Club in Worcestershire has been with the 21 year old club since it began, throughout 18-hole parkland course's conception, construction and operation. "I'm in the fortunate position where I was involved in the design and building of the course, and now I manage it," he says.

Andrew is not the only long-time servant at Ombersley; so are the club's John Deere 2500 Series greens mowers. It's a machine he has operated through all of its incarnations, from the original 2243 model to the latest 2500E hybrid electric machine, the newest arrival at Ombersley.

"We bought our first 2243 in 1996 from Parks & Grounds Machinery at Bidford on Avon (now part of the Tallis Amos Group of dealers)," he says. "Our problem at the time was back-up, and I knew John Deere operated a reliable next-day parts delivery service.

"But the big selling points were the improvement in the quality of cut and the offset cutting units. Being able to mow clockwise around the green perimeter one day and anti-clockwise the next eliminates 'triplex tracking', the ripples that can occur from mowing constantly in the same direction."

Today the 2500 is dedicated to the aprons, and the 2500A is used with cassette attachments such as sorrel rollers. Andrew describes Ombersley's third generation John Deere greens mower, the new 2500E, as taking greens mowing to a higher level.

"The whole machine is just better designed," he says. "The QA quick cutting height adjustment system and the groomer are far superior, which enables us to achieve a better putting surface. The electric cylinder drive also means there is far less risk of hydraulic leaks.

"In addition, the ability to maintain both forward and cylinder speeds at reduced engine revs is a great benefit. We have measured the fuel consumption on this mower, and we save 1.5 litres per 18-hole cut. Its quiet operation also means we can get out early in the morning without disturbing the local residents."

Andrew also expects the John Deere 2500E to maintain the mower's reputation for longevity. "We have always wanted reliability, and the 2500 series has proved ultra-reliable," he says. "We know from running John Deere machines for a long time that they are built to last and we can run them for long hours.

"It's not only a credit to John Deere, but also to our regular service engineer, Dave Symonds. And on those occasions when we have needed parts and back-up, the service from Parks & Grounds Machinery and Chris Tallis has been fantastic. When considering new machinery we always have demonstrations and listen to what the operators want. It comes back to John Deere every time, and we're very happy with that."