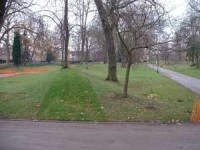 Renovations to England's first public park are nearing completion with the laying of almost 8,000 sq metres of Yorkshire turf.

The Arboretum, donated to the town by former mayor and mill owner Joseph Strutt in 1840, and on which New York's Central Park is believed to be modelled boasts a design based on a series of sinuous mounds following a serpentine path winding around the entire perimeter. "The landscape opens up the space and makes the park seem larger than it really is," explains Karin Aberg, Arboretum Park Manager. "We have received around £5.2 million of combined Lottery money, Urban 2 funding, European funding and Single Regeneration budget, and as well as restoring architectural features like the Florentine Boar, entrance gates, railings and the children's playground, we have worked on the landscape itself." 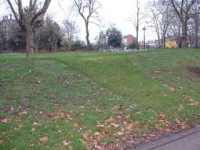 Darren Barnes, Contract Supervisor for English Landscapes who are handling this side of the operation says that the mounds had suffered from motorbike traffic over the years. "We stripped them down, placed a layer of geotextile on top and then built them up with 200 tonnes of Loksand, (sand reinforced with crimped polypropylene fibres). We then compacted the area with a compaction plate, and layed Lindum's Lokturf, turf grown into a reinforced root zone on the crown." Lindum's latest innovation, Grassfelt, a soil less turf grown into a felt root zone was used on any areas of the mounds' sides which fall at an angle of over 25 degrees.

"The mounds vary in height from ½ a metre to 2 metres and we needed a turf which was strong and flexible and wouldn't tear," continues Barnes. "We've used Lindum for years and never had any problems. Their Festival turf, a hardwearing landscaping mix has gone down on the flat grassed areas."

For further information on any of Lindum's reinforced or natural turf, contact the company on Tel: 01904 448675 or visit their website at: www.turf.co.uk