A turf covered car was one of the attractions at the Groundbreakers event held at Writtle College on July 2nd and 3rd. 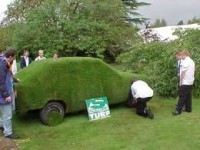 The activity, supported by Sovereign Turf, was organised to encourage people to think about the turf, horticulture and landscape industries.

Visitors helped to cover the car in turf during the event, which is organised each year to encourage people to think about what the great outdoors can offer.

The activity combined two of the subject areas which can be studied at Writtle College - turf and sports turf and motor vehicles.

Stewart Brown, senior lecturer at Writtle College said: "This was quite an unusual way to get people to think about turf but it did prove to be very popular."