by Peter Driver
in Industry News, Machinery & Mechanics, and Golf
on 16 Jun 2015

0 Turf Maintenance in the mountains of Bavaria 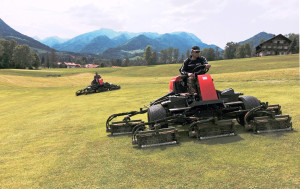 Situated in the picturesque Ruhpolding Valley, just three minutes from the town centre, Golf Club Ruhpolding, has been a loyal Jacobsen customer since 1992. They currently operate four UK-built Jacobsen Fairway 405 large area cylinder mowers for maintaining their fairways and semi-rough.

The club began life as a six-hole practice facility before developing into a nine-hole course following a design by renowned German architect Kurt Rossknecht. In 2005 it became a full 18-hole facility when a further nine holes were added to a design by Thomas Himmel to make it 6,004 metres long with a par of 71.

It is 600 metres (2,000 feet) above sea level, occupies a 100 hectare site and features one of the largest driving ranges in Europe. Due to its location in a residential area, the club imposes restricted practice times on the golf range using balls with reduced flight characteristics - 40% less range than normal balls.

The club has a healthy membership of 1,400 and has many famous alpine sports personalities among its members including triple Olympic biathlon champion, Ricco Gross, who has a house beside the 14th tee.

Richard Jany joined the club 24 years ago and for the past 18 years has been head greenkeeper. He leads a team of eight; seven greenkeepers and a dedicated mechanic. Practical and highly skilled, much of the course construction was undertaken by them and in 2012 a new machinery storage unit was built, with all work done by greenkeeping team. 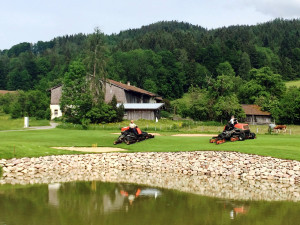 Commenting on his Fairway 405s he said,"In summer we a literally a grass factory. We have wide, open fairways and large areas of rough, so we need tough and reliable mowers. We maintain our fairways at 15mm, the semi-rough at 33mm and the rough at 75mm. The power of 405 engine is superior to competitor's equivalent mowers, especially when it comes to climbing slopes, which is obviously very important to us in this location. The quality of cut is very good and it is very comfortable for the greenkeeper.

"The start of our season can be extremely variable, in 2013 we opened on 18th April, and compare that with 2014, when the first players were out on the course on 14th March, some four weeks earlier. We normally have five to six months of snow, but in 2014 we only had eight weeks!"

The Club Manager at Ruhpolding is Herbert Fritzenwenger and he added,"As well as healthy membership, we also have a significant number of green fee paying guests, many from nearby Austria. Although we are situated in the mountains, the course is relatively flat, but we do have a fleet of 13 EZGO electric golf cars, which are a mix of RXV and TXT models.

"As far as competition is concerned, there are 60 golf clubs within a 100 kilometres, so we have keep our standards high. We are fortunate that the club is debt-free and has a sponsorship agreement with Hewlett Packard. The club was originally financed by 120 members and currently has 220 shareholders, who enjoy a package of additional benefits when compared to regular members."

Ransomes Jacobsen is a Textron Inc (NYSE:TXT) company. More information on the product offering can be found at www.ransomesjacobsen.com.