The Awards were chosen by the magazine's editorial staff, its specialist contributors and turfcare experts, and reflects the products, personalities and projects that have made their mark during 2003.

NEW PRODUCT OF THE YEAR- The Humus Safety Mulcher system 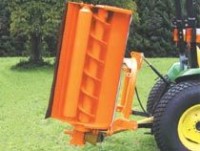 A brand-new cutting system, which can be used on pedestrian machines, front or rear tractor mounted, or fitted on an arm for hedge trimming or ditch cutting. The Humus cutting unit is a worm-drive rotor fitted with cutting blades that will safely eject objects such as cans without damage - a real alternative to cylinder, rotary or flail units. The Humus is distributed in the UK by Simon Tullett Machinery Company. 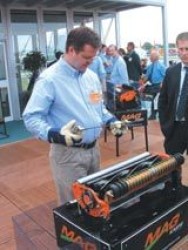 Another breakthrough in cutting technology. The Mag-Knife from Ransomes Jacobsen launched in the UK last September is a new system for attaching bottom blades. Using powerful magnets, the system not only reduces the time required to replace worn or damaged bottom blades from hours to minutes, but field trials have also confirmed that the magnetised blade will 'give' if small, hard objects such as coins or studs are encountered during cutting. 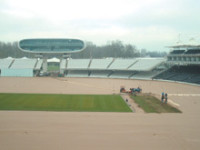 Lord's, the headquarters of world cricket, is a sporting venue that dramatically mixes tradition with award-winning architecture. When the MCC, decided to replace the outfield with a new, fast-draining surface and install new irrigation, it was always going to be a race against time to rip up the outfield, take away the millions of tons of London clay, and install the new surface between the end of one season in September and the start of the next in April. STRI was the main consultant and completed the project on time and with stunning effect. 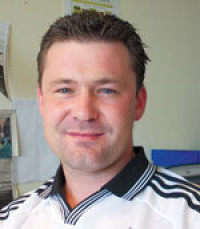 Dave Saltman, together with co-director John Richards, has worked tirelessly over the past two years to establish Pitchcare as a lively and topical on-line resource for all those involved in the turfcare industry.

The website stimulates debate, takes up causes and issues on behalf of Groundsmen and greenkeepers and offers everyone who looks after turf, whether they be professional or voluntary, expert advice from people at the top of the turfcare profession.

Where else can a Groundsman at a village club get first-hand advice from the likes of Keith Kent at Twickenham, Mick Hunt at Lords - or even John Kettley on the weather?

Pitchcare says it has over 6000 members, is developing extra services, whilst acting a timely and often controversial voice of the profession, tackling key issues and continually fighting for greater recognition with national bodies such as the FA.

MARKETING CAMPAIGN OF THE YEAR- Calor for Green Flag Awards

Calor joined English Nature and English Heritage as a major sponsor of the Green Flag Awards, an initiative supported by the Prime Minister's Office to promote clean, attractive and accessible parks and public spaces in England and Wales. Calor provides guidance to local authorities and contractors on the use of lower emissions groundscare equipment powered by LPG. 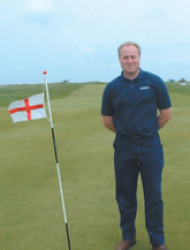 Royal St George's at Sandwich was the venue of the 2003 Open Championship. After the championship, many of the world's top players praised the course for its superb preparation and presentation.

Tiger Woods said "It says something for the quality and set-up of the course when only one player (winner Ben Curtis) bettered par during the Championship - that's a real test of golf." Phil Mickelson said "It's very fair, the greenkeeping team have done a great job setting up the course. It's one of the best Championship courses I've played on in years." Whilst Tom Watson added, "The greens are excellent, with lots of variety which I like."

For the man responsible, course manager, Neil Metcalf, it was the culmination of several years of planning, not only of preparing the course itself, but as Royal St Georges lies within a Special Area of Conservation (SAC) he had to ensure that the wildlife and rare flora and fauna were protected from the thousands upon thousands of people who descended on the Kent course.

Neil, who was a new recruit to the course when The Open was last held at the venue in 1993, had moved south to Sandwich after spells at Cooden Bay Golf Club in Aberdeenshire and Crieff Golf in Perthshire.

Neil worked with a team of nine greenkeepers and one mechanic in the build up to the Open, and liaised closely with the STRI and the R&A to ensure that when Sandwich became the focus of the world's media for four days in July, the course looked in pristine condition, and provided a stern but fair test for the golfing superstars.