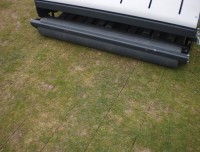 In the sports turf industry today, there are very few people who do not understand benefits of regular aeration in combating the problems associated with compaction. Opening up the ground to receive air, water and nutrient is widely accepted and, with very few exceptions, the practice is widely adopted by the majority of sports turf professionals.

With the variety of aeration and decompaction equipment available in the market today, there are a number of different ways that this can be achieved, with machinery available to suit most terrains and budgets.

It is also generally accepted that the benefits of decompaction and aeration are greater when done on a regular basis, as long as surface disruption is kept to a minimum during the playing season, especially on fine turf swards. However, the demands of the grass do not revolve around playing seasons and, when compaction becomes a problem, it should be addressed sooner rather than later. Waiting until the end of season often means that remedial work is done too late, and the results of the compaction have already had a negative impact on the sward.

In reality, there are very few occasions during the winter months from December to February when maintenance equipment can be used to good effect. Apart from adverse weather and soft ground, the lack of growth means that any damage done by tractors, turf vehicles and excess footprints will be visible well into the year. As we progress into the spring and the ground (hopefully) starts to dry out, ground temperature rises and new growth appears, we must commence our aeration programme at the earliest opportunity to "freshen up" the root-zone.

The more aerobic we can make the rootzone early in the year, the better the sward will be during the late spring and summer when the demands are often at their highest. This poses the question of what kind of aerator or tines will give the best results and most long-lasting benefits, without disruption to the playing surface. One option is linear aeration.

Linear aeration and decompaction is sometimes misunderstood, and often dispelled by the myth that the slits will always crack wide open. This doesn't have to be the case, and the benefits will undoubtedly be evident long after.

When we make a continuous slit in the surface, we create a line of weakness and, as the ground dries, the contracting forces will pull the slit apart. If we only make one pass with a series of parallel slits in the surface, the contraction will, sometimes, be severe and the slits will stay open and remain visible and unsightly for some time.

However - and here's the turf tip - if two or more passes of continuous slits are made at angles to the first pass, the contracting forces are reduced and the slits do not open up as severely. A light topdressing of sand can be worked into the surface, infiltrating the slits and improving the soil composition, improving drainage qualities and aiding root development. With the onset of the growing season, a more resilient sward should develop that will withstand heavier play and retain vigour throughout the summer season.

There is evidence that the results of decompacting with a rotary decompactor, like the Imants Shockwave, are immediate and long-lasting. When used in conjunction with lateral passes from a linear aerator, like the Rotoknife, surface disturbance is minimal and root development is increased.

If in doubt, try it out!