Herbage Legumes, or where I comes from we calls it grass - that's grass with an a not a extended r, like the a in Bath, it's not Barth, and the a in Malvern, if it was Molvern then it would be spelt with an o. However you say it, and now I've alienated everyone south of Watford Gap, we in the British Isles grow the best grass in the world. We are without peer when it comes to the green stuff. We also produce the best groundsmen in the world and provide the widest variety of sports with the best natural turf pitches to play on.

We should accept, at this point, that we have some of the worst and most over used also.

Only recently, I went with my grandson to watch him play his first organised footie game. The coach was bewailing his lot that he could not play more matches for the under 7s, because he had fifteen teams that he had to fit in, and only one junior and one full size pitch! The other team's coach had an even worse situation as he had to borrow an area of grass to train his seven teams on, as the local authority would not let him train on the main pitches.

I was being asked what could be done to help them in their plight. For example, what should be done to maintain something like a reasonable playing surface? And all this without spending money! The work, of course, would be done with voluntary and, in most cases, unskilled labour. So, what do you say when confronted with this?
Well, therein lies the rub. With the constant traffic of hundreds of pairs of feet over limited areas, compaction is the most serious problem. Through rain, shine, drought and flood, the poor old earth takes a fearful battering and the surface of the ground becomes clogged and unable to breathe. The grass gets trodden into the top inch or so and, as the soil cannot breathe, the herbage will not break down and the soil becomes sour. We have all seen the groundsman going over these worst areas with a hand fork, either letting off surface water or aerating, but this will take an exceptionally dedicated individual to do a whole pitch this way.

So, what cash have you got available, what is the minimum standard you require, and how much time have you available to spend on it? 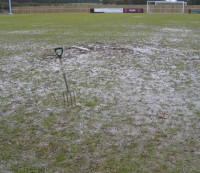 The easiest way is to get a contractor in to do the job and then sit and await the result of the project. After koroing, decompacting, seeding and topdressing you will see surprising results in a very short time. However, if the budget will not run to this, what can be done?

Grass roots grow into the soil or, more correctly, in the microscopic spaces in between the soil particles and, if there aren't any spaces, they don't grow, and bare patches of ground will attract surface rooting grass like Poa Annua, and other weed grasses that now predominate our overused pitches. With that comes surface instability.

I can remember, back in the day that Annual Meadow Grass or Poa Annua was accepted as an ornamental grass, we used to call it trembling grass as, when the plant reached maturity, the seed head used to tremble with the slightest breeze and, over large areas, it used to create a shimmering surface of some spectacle. These days though, it is the stuff of nightmares to many a groundsman or greenkeeper, and we have had to develop techniques to counteract its invasion. One thing is for sure, it will get into your sward sooner or later, and you had better be prepared for it.

So, surface scarification becomes an important part of any pitch care project that, coupled with surface hygiene, should be practised at every available opportunity.
There is little point in scarifying and leaving the residue behind to be trampled in the next time the pitch is used, as this is counterproductive. I am still surprised that, even today, some top class groundsmen do not go over the pitch after a match with a rotary mower collector to collect the detritus from the match, but leave it to let nature take its course. The net effect is to see yellow patches where the clods and divots have been left, further putting the already stressed plant to further exposure of disease and fungal infection.

Continual light scarification, provided the right weather conditions prevail, will assist in keeping the surface aerated and allow the green matter to breakdown and the nutrients utilised for the benefit of the plant's regrowth.

This need not be an expensive procedure. There are light sportsfield harrows available at little cost and they, whilst not the panacea to all problems, will assist in keeping the surface aerated to some degree, and the surface debris loose, thus enabling the natural elements to move or help them breakdown. This, coupled with a regular linear deep aeration that will oxygenate to depth, as well as fissure laterally between the blades, will allow root growth and help stabilise the surface.
So, after the surface has been aerated and allowed to breathe, we need to think about seeding. How often do we see groundsmen going over the areas of high wear with a bucket of seed and soil, filling in divot holes and bare patches without preparing the area first? Well, it may make them feel better having done it, but I feel this is a more emotional rather than practical response. After the scarifying, get hold of a disc seeder to place the seed where it is most needed, i.e. in the soil, not scattered all over the surface, where the old adage of 'one for the pigeon, one for the crow, one to rot and one to grow' comes in.

Work with Mother Nature on this. If it's not going to rain, and you have no irrigation, wait until the forecast is more in your favour - although, if the seed is placed into the soil, it will germinate when the moisture gets to it - it will make life much less stressful, not only for yourself but for the playing surface itself.

Germination from a disc seeder is far higher than the broadcast type and the growing in between the row time, particularly with the newer Super Compact seeders with a 35mm spacing, is minimal We have greenkeepers who tell us that they are getting 99% germination with the super compact. How do they know this? I have this picture in my mind of them on their hands and knees crawling up and down the slots prising them apart, counting the seeds and checking the germination on a regular basis!

It has been worked out that, after as few as ten to twelve applications with the Super Compact, up to 80% of the grass species can be replaced. So, Poa Annua, watch out, we are on your case!

We spend hours of our lives preparing the ground, sowing the seed and pricking and preening the resulting growth, only for it all to be trampled and abused by the homosapiens who exert the greatest footprint per square centimetre of anything that travels over a pitch. Not only do they run on it, but jump up and down, slide, spin - and all this with studs on their feet - tearing out chunks of the plants that are so lovingly tended ... and leave us needing to start all over again.

Little and often is a phrase that should be borne in mind during the playing season and, wherever possible during cutting, cart off the clippings, or cut it often to minimise the amount left behind.