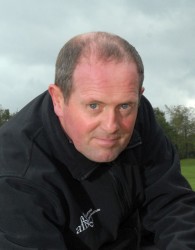 Multi-million pound businesses at golf courses, football and rugby stadiums and racecourses have a lot to be concerned about. There is increasing recognition that, within a few months, root systems of hallowed turf can be destroyed as the turf becomes thinned, unstable and, more importantly, unplayable. It's potentially a costly commercial nightmare as pitches and greens have to be relaid.

Fortunately, there is a new and potent weapon in this recent 'Turf War'. Lead scientists at the Belfast based Agri-Food and Biosciences Institute (AFBI) are examining the problem and are currently studying new methods to manage nematode outbreaks, advising key sports facilities on how to control potential damage to expensive and vital playing surfaces.

Colin Fleming, lead scientist from the Applied Plant Science Division with AFBI outlined the problem. "It's a fast growing problem for our sports grounds. We estimate that 90% of all new football and golf courses with sand based constructions are experiencing significant nematode damage. Plant parasitic nematodes are microscopic roundworms (adults are 0.5-3mm long), with most of the 4100 described species living in the soil, where they feed on plants, especially their roots. The heads of plant feeding nematodes contain a hollow spear or stylet with which they pierce root cell walls and ingest the cell contents, causing the plant roots to die."

"Although nematodes have been about for some time, several key changes in modern turf grass construction and maintenance have encouraged their spread and exacerbated the problem, creating a distinctive pattern of destruction of grass root systems."

"For golf courses and sports stadiums, the more recent move to sand-based construction, to help with drainage and playability, creates a perfect environment for nemotodes and, so, has also increased their levels in the soil base."

"More and more of our well-known sports facilities are beginning to show evidence of root damage. An affected turf typically displays reduced vigour, wilts easily in dry conditions, responds slowly to nutrient application, becomes stunted and chlorotic and may eventually die. Ground management staff are becoming more aware of the issue where, previously, the condition was perhaps mistaken for a fungal infection, or 'yellow' or 'takeall' patches."

"The problem is certainly being made worse by climate change, as milder winters have allowed nematode levels to increase and hatching numbers of the juvenile worms are both higher and occurring earlier in the season."

"The commercial implications of this damage have been seen this autumn at a Chepstow racecourse, who have had to cancel the end of their Flat Racing season due to turf instability as a result of nematode damage. This created a potential hazard to the expensive racehorses that could catch a foot on the damaged turf. Since this story came to light, we have been contacted by a number of other racecourses in the UK to analyse soil samples to monitor their own courses."

"At present, our research shows that this is a world wide problem with no simple cure. Once you have plant parasitic nematodes in the soil base, it is almost impossible to eradicate them. Research, working with a number of forward thinking turf-based sports facilities worldwide, is identifying best practice methods of managing the problem, restricting the levels of nematodes in the soil and, so, reducing potential damage. We are then able to offer advice to these sports facilities on the best strategies to manage the problem, backed up by regular soil testing to identify times of high level nematode hatching and grass maintenance."

"We are also carrying out research into the commercial use of a number of natural compounds that are showing huge potential in treating risk areas during hatching periods, so reducing nematodes to safer levels. Several of these environmentally safe compounds are showing tremendous promise in the ongoing fight against this commercially difficult problem."

"The turf based leisure industry is looking closely at this new technology as it seeks environmentally sound technologies that are easy to use by grounds staff, reduce levels of nematode numbers, improve turf quality by keeping root development healthy and, ultimately, save the huge sums of money it would take to replace the sports turf."

One of the forward thinking leisure facilities taking part in the AFBI research programme is the beautiful and recently constructed Lough Erne Resort in County Fermanagh. This scenic lakeside Championship golf course was constructed in 2006 using a sand based design and, after eighteen months to two years, showed signs of nematode damage in the greens.

Head Greenskeeper, Sean Reilly, explained. "Premium courses have to deliver high playing standards that players have come to expect. If we weren't so pro-active in

tackling the problem, playability would deteriorate and problems would develop. Our championship course here at Lough Erne Resort has a sand based construction which allows the course to remain in play throughout the year, and this makes business sense. However, it does also place more pressure on the playing surfaces, and especially the greens, where the turf can become more stressed and the native nematode problem can become more of an issue if not treated."

"Additionally, on championship golf greens, the pressure from players is on to cut the sward as short as possible to increase the speed of the ball when putting, but this in itself is putting more stress on the turf, which is allowing the problem to multiply."

"We first noticed problem patches on our greens about two years after they were constructed in 2006 and have been working with AFBI ever since then. We take soils samples every three weeks, sending these to the AFBI laboratories in Belfast so that they can monitor nematode levels all the time and identify the stage of the nematodes life cycle for treatment. When turf is treated during the hatching period of the cycle, it is most effective in reducing numbers by 90%."

"AFBI help to advise on how we can best treat the problem here, and we are also one of the pilot amenities to test some of the new compounds that AFBI are developing to treat the problem. The natural compounds fit well with our strict environmental policies and natural wetland areas and are safe to use so close to the lakeside. We have had some successes so far with some of these and, despite the ongoing problems, our course has stayed in great shape for our players and we know that's because we have tackled this head-on. We feel we are winning the battle against this almost invisible enemy."

Head Groundsman, Tony Bell, has been involved with sand based pitches since 2002, but had never encountered the problem of nemotodes until he started to have turf problems during the 2005-2006 football season.

"Pitches always thin during the winter season as light levels drop but, by Christmas 2005, the pitch was deteriorating quickly, and was becoming soft under foot. Stability became a real problem even though, initially, there had been no visible signs of problems. There were no yellow patches either in those early stages, but we lost over 80% grass cover by 2006 during a very busy European season."

"Soil samples were taken and sent to AFBI, and nematode damage was identified as the problem by Colin Fleming's team. As a result we took eight inches off the pitch surface and replaced this with a completely new soil, sand and fibre construction but, by 2007, the nematode infestations were back as before."

"We have been soil sampling continuously, working with AFBI for analysis of root damage and nematode hatching, and following their advice for the management of the pitch. This has been crucial in minimising damage and, therefore, costly repairs to the pitch. We have also been involved in trials of a number of natural compounds currently being developed by AFBI, that are showing some sign of helping to reduce the problem. It is important to concentrate on spraying these compounds to coincide with the major hatching periods of juveniles in spring, summer and autumn, as it has shown to be difficult to catch the egg masses within the root structures themselves."

"For the last two years, we have been able to control the situation by managing and limiting the damage from nematodes by a programme of sampling to identify life cycle stages and spraying at hatching stages. We have also looked at our cutting regimes in an attempt to reduce stress on the turf, which makes it move vulnerable to nematode attack."

"During our short maintenance period, in the early summer months, we also have been removing the top 10-15 millimetres of soil, which helps to get rid of the additional problem of meadow grass and algae that start to invade thinning turf areas as a result of nematode root damage. This has helped to maintain playability and has been a better commercial option than replacing the entire pitch surface every year, which is an extremely costly and also lengthy process."