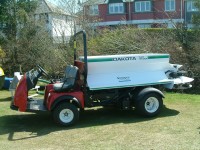 Conwy (Caernarvonshire) Golf Club is the only Open Championship qualifying venue in Wales and recently hosted a new TurfCare trade event for the North Wales region. Held during the third week of April, this event was the brainchild of Club Head Greenkeeper David Lewis and attracted many leading manufacturers and high quality visitors over the two days.

Groundscare Products were one of the major trade manufacturers to support this inaugural event. Their range of self-propelled, walk behind landscape machinery was shown and included the Power Edger and Brush Cutter. Other exhibitors included Campey TurfCare Systems, Sheriff Amenity and Rigby Taylor.

Crocodile Golf Products chose the event for their first ever trade stand to display their top class selection of replacement cylinder mower blades and bottom blades. Farmura Environmental promoted 'Revolution' from Aquatrols amongst their many turf enhancing products.

John Deere were represented by Mona Tractors. Major R. Owen Ltd are the local dealer for Toro - it was from their own event here in 2009 that the expanded idea for Connect emerged.

The picturesque location of Conwy Golf Club is an ideal venue for an event of this kind. Held on the Practice Ground area of this course, the event drew many positive statements from trade exhibitors and their guests. There is strong encouragement from the exhibitors to develop the 'Connect' event for 2011 with the introduction of some technical seminars and to also include a round of golf as part of enhancing the total package for exhibitors and visitors. Tel: 01492 592423. www.conwygolfclub.com