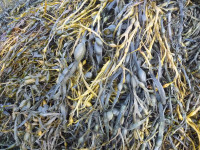 The use of biostimulants to reduce the impact of stress has been a valuable tool used by groundsmen and greenkeepers for many years. Stress can be biotic (e.g. disease, pest attack) or abiotic (e.g. cold, heat, drought) and, in most cases, the mode of action of biostimulants (such as seaweed extracts, humic acid, triazole fungicides, amino acids, potassium silicate) has remained elusive.

The good news is that recent studies are now starting to identify how and why these materials are effective in protecting plants against a wide range of stresses, and this knowledge should help to develop more targeted and effective biostimulants for the industry.

One of the most effective group of biostimulants for reducing stress in turf are the seaweed extracts, particularly those derived from the seaweed Ascophyllum nodosum. This algal species is intertidal and it has been argued that its ability to reduce stress is due to the presence of compounds used to protect the seaweed whilst it is exposed on the shore. 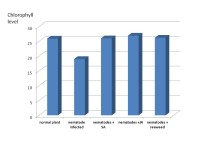 Until recently, it has been believed that plant hormones present in seaweeds act directly on the stressed plant to protect and enhance growth, but recent analyses suggest that hormone levels are insufficient in seaweed extracts to accomplish this. Now, it seems more likely that seaweed compounds act indirectly, perhaps interacting with the endogenous hormone and plant defence systems, to elicit defence and growth.

One of the common symptoms observed, following pathogen attack on turf, is a reduction in photosynthetic activity. Some recent experiments, carried out at AFBI, have demonstrated that applications of the plant hormones SA, ET, JA and seaweed extracts can restore normal levels of chlorophyll in plants subjected to root knot nematode (Meloidogyne) attack (Figure 1). This may explain the reduction in nematode symptoms observed after use of biostimulants in turf. 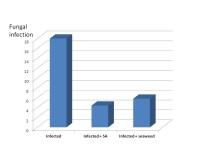 Fungal infections can also be reduced by foliar applications of hormones and biostimulants (Figure 2). These appear to up-regulate the innate plant immune system and allow the plant to withstand infection. Interestingly, many of the plant genes involved in protection against biotic stress may also be linked to defence against abiotic stress.

Many of the current studies involve monitoring changes in gene activity following various stress or biostimulant treatments, and identifying how these plant genes interact with biostimulants is allowing new formulations and bioactive compounds to be identified.

It is likely that we will see a number of novel treatments appearing over the next five years, which will enable fungicide inputs to be reduced without compromising turf quality and plant health.