WBB Minerals and Scotts launched a brand new rootzone system at Old Trafford, Manchester. Many of the UK's leading agronomists and constructors were in attendance to see and hear the benefits of this new soil technology product. The delegates were given three presentations about TurfStart TM.

Mick Higgins from WBB talked about the concept of TurfStartTM which comprises of a choice of WBB free draining washed silica Sands, mixed with a blend of organic amendments including their own WBB Devon lignite. The lignite offers small amounts of NPK and trace elements, humic and fulvic acids as well as increasing organic matter content and therefore increase the (CEC) Cation Exchange Capacity in the soil profile when used.

Stuart Staples from Scotts then explained the role of the (CRF) Controlled Release Fertilisers that had been formulated to fulfil the needs of newly germinating seed. 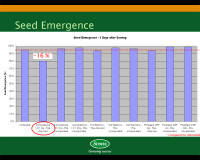 Finally Dr David Lawson from the STRI explained about the trials that had been undertaken in May 2006 and the astonishing results regarding the improvement in root density when using the product TurfStart TM. Results showed that grass seed grown in TurfStartTM germinated considerably faster than seed grown in conventional rootzone materials. The product produced a root mass 60% greater and increased the rate of ground cover by 60% over a 3-month period.

The new system differs from conventional rootzone materials in that it is pre-blended with Scotts latest controlled release fertiliser technology and, under a patented process, mixed with a quantity of lignite from WBB's reserves in Devon. 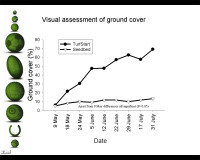 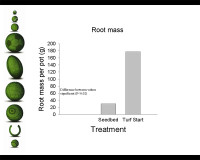 "When it comes to natural turf construction, the rules have remained pretty much the same for the past 25 years," explained Mick Higgins, WBB Minerals Technical Manager. "We believe that the TurfStart rootzone system is genuinely going to change that. The increased root mass enables the plant to draw in and absorb far more nutrients, creating a much healthier plant with improved tuft vigour, greater stability, higher drought tolerance and a greater resistance to disease. The controlled- release fertiliser also reduces leachate to a negligible level. And then there are the cost and time benefits of not having to calculate and apply a fertiliser after the rootzone is laid in the conventional manner."

Having seen the contrasting difference in root mass seen in samples shown at the launch and the results of the trials it would seem apparent that there would more to gain in incorporating TurfStart TM when constructing new sports fields.

WBB have spent a lot of time, money and recourses evaluating this new concept and are confident it will offer the sports turf industry a great opportunity to ensure newly constructed sports field and pitches have the best chance to establish themselves more quickly .I am sure the proof of the pudding will be in the eating.