by Charmian Robson
in Technical, Robotics, Schools & Colleges, Rugby, and Football
on 06 Sep 2021

Over the last four years, the newest introduction has seen fully autonomous line markers, such as the Turf Tank One, enter the industry. This linemarking machine combines the best of all the recent advancements by using battery power and a global navigation satellite system (GNSS) receiver coupled with a real-time kinetic (RTK) base station which greatly increases the accuracy. 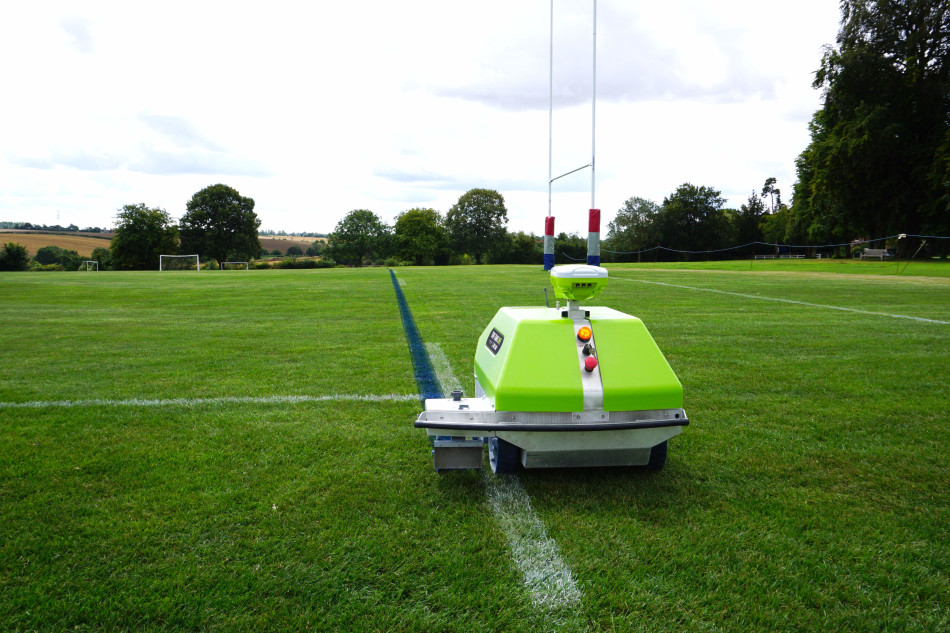 Base stations are commonly used in agriculture and surveying due to their precision. Other methods, such as GNSS with GPS used in smartphones, have accuracy that make them suitable for applications like Google Maps, but they lack the accuracy needed for initial marking or overmarking that can be found using the Turf Tank robot.

After all, accuracy is everything in linemarking, and this is what makes the base station so crucial in the process. An RTK base station improves the accuracy of the robot (rover) by providing it with real-time correction data accurate to +/- 1 centimetre. This means a GPS receiver capable of RTK takes in the normal signals from the GNSS along with a correction stream to achieve 1cm positional accuracy.

Compared to other autonomous linemarkers, the base station allows the Turf Tank robot to be operated without needing an expensive external cellular provider and, because the source of the correctional data is on your pitch, you don't have to worry about being too far away from the network and losing signal. The Turf Tank robot will always be localised with perfect precision, no matter where you are on the planet.

Getting this high level of accuracy using a base station was developed for surveying and plotting sites where accuracy is equally important. The same principles are used to map out pitches and store them with the Turf Tank, which means by putting the base station back into the same place a week, month or year after marking, you'll still get the same accurate pitch. 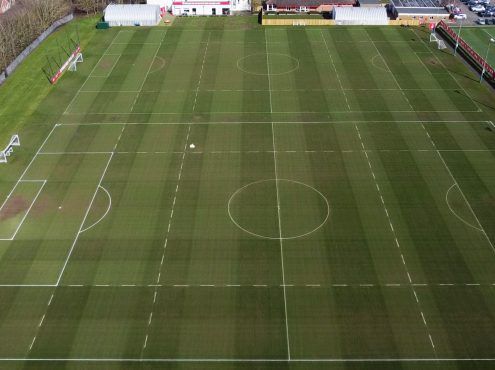 Whilst all of the tech specs read well on paper, the natural reaction is to question how well it performs in the field. A recent open day at Nottingham Forest Football Club's Nigel Doughty Academy - who have their own Turf Tank - displayed the accuracy and speed promised, an 11-a-side pitch in twenty-five minutes, which is significantly faster than the estimated two hours it would take two people. With that performance, the labour-saving aspect of the robot cannot be questioned.

But, away from the pristine carpets of Championship football, contractors such as Premier Pitches and Countrywide Grounds Maintenance are using their own robots with the more traditional challenges of uneven surfaces and moving from site to site each day.

As a Sports Turf Contractor at Premier Pitches, Liam Reynolds has been hands-on with the robot since April 2021 and, in that time, has trained staff from their early twenties to mid-fifties on the new technology.

"The central core of the business is sports turf renovations, but then we have a lot of ground maintenance contracts between August and April," Liam explains. "So that is looking after anything from grassroots football and rugby up to semi-professional football. It's grass cutting, linemarking, spraying selective herbicides - low level general grounds maintenance but providing them with a high standard of service."

"We are currently contracted to maintain twenty pitches, two rugby pitches and eighteen football pitches. So, to do the initial marking, we'd need anything between three and five people going out and marking from scratch and, after that, it's at least two people once a week going around the twenty pitches overmarking them."

"We'd looked at the Turf Tank a couple of years ago, and then our attention got diverted onto other parts of the business, and we went away from the idea. But, with furlough and Covid hitting last year, I and one of the directors, John Woolfall, looked at in a bit more depth to ease the workload on staff." 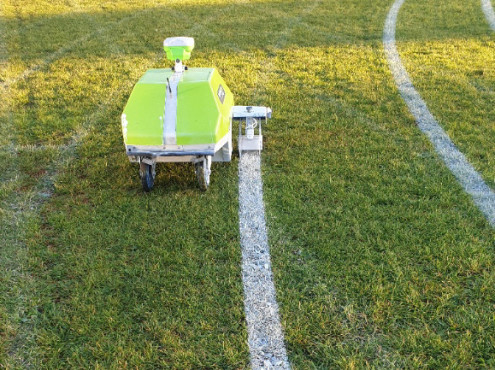 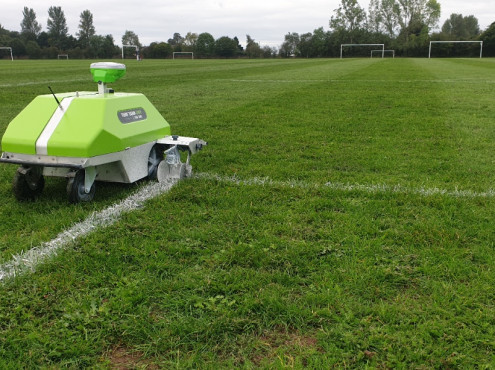 "We got in touch with Matt at Turf Tank, and he came out and did a demonstration for us, and for how quickly he went to one of the pitches, found the sockets, put in the dimensions and then marked it out almost from scratch - that sold it in itself to us. We'd be using three people for three or four hours to mark it out from scratch, but he had it done in three-quarters of an hour and then, when you times that by twenty - especially for the initial marks - it is a significant saving."

"During furlough, we had one member of staff marking, and it took him all day to mark one pitch out on his own from scratch because he was up and down with his tape measure and stringing lines but, with the Turf Tank, it takes twenty-five minutes to mark a pitch and you can repeat as often as you want. You put the GPS where it needs to be, and the robot knows where the pitches are, and it's a 25-minute job in the future."

"It's been very accurate for what we want to do. Week on week, you put the base station in the exact same place, and you can see to almost a millimetre that the robot is following the same line as what it put down last week."

"We've got people that work from their early twenties up to their mid-fifties, and they all seem to have grasped it on the first attempt. I think the younger ones grasp the technology quicker. If we had to use it to mark something we hadn't before, like an athletics track, I think the younger ones would be more likely to explore the software. Still, it is simple enough that anybody in the company now is capable and confident of picking up the tablet and going out." 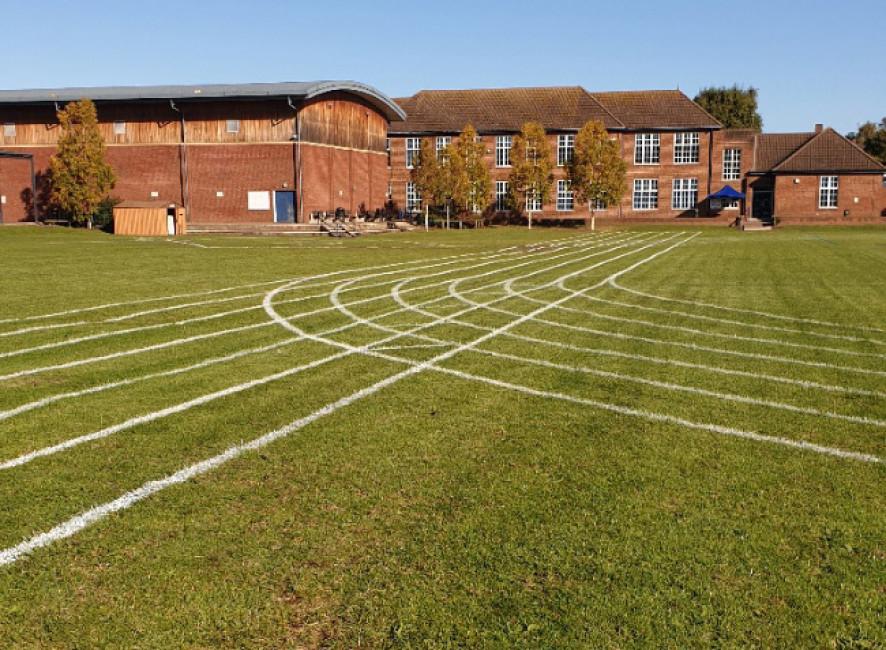 "By the time they have set out four or five pitches, it's then just a routine, and they know what they are doing, and it is just a routine and a process. So, as complicated as it looks, it is so self-explanatory in the same way, and I think for people in their fifties to pick the tablet up and, after a day of tuition, go out and use it without any problems says itself how simple it can be."

"What we are now looking at from a contracting side is offering an initial marking service. So, if we went to a football club, let's say to someone's training ground, the first year we went there, we'd put all the pitches out for them where they wanted them, and the next year it's just a case of putting the base station in the same place and instructing the robot to mark the pitches out. So, hopefully, that's something that we can pick up a bit of work with."

"We don't want to take the groundsmen's job away from them, but just aid them when they've got a few days of man-hours setting out all these pitches from scratch, we can turn up at the beginning of the season, set the pitches out and then hand them back to the groundsmen. Then, once the lines are down, it's easier to follow them and keep the pitches in place where they are."

"One thing we did stress to the staff at Premier Pitches was we weren't getting it to replace anybody; we were getting it as an extra member rather than a replacement. So the robot is a member of staff, and its job is to mark the pitches out and, whilst it's doing that, it allows the other members to do other bits of work on the sites that, in the past, either hasn't been done or have been a low priority because the priority is the pitches."

"We will use it for overmarking on our own contracts, but it allows the person that is initially marking to go out and do other jobs whilst keeping an eye on the robot. They can do some litter picking, strim banks and jobs like that."

"It gives people that bit of extra time, and we can give the pitches that bit of extra care. It improves the quality of service that we can offer our existing clients, so rather than us just going and marking the pitch out, whilst it's marking, we can tidy the site up and make it cleaner and tidier and go into that extra detail."

Providing the extra detail isn't exclusive to Premier Pitches. Like them, Countrywide Grounds Maintenance have used the robot to expand their offering. Having the option of athletics tracks, American football, lacrosse and baseball in addition to football and rugby has meant the company can offer their services for a broader range of sports. Being able to grow using the capabilities of the Turf Tank is one thing, but they also use the robot to tailor markings to the specific needs of each site. 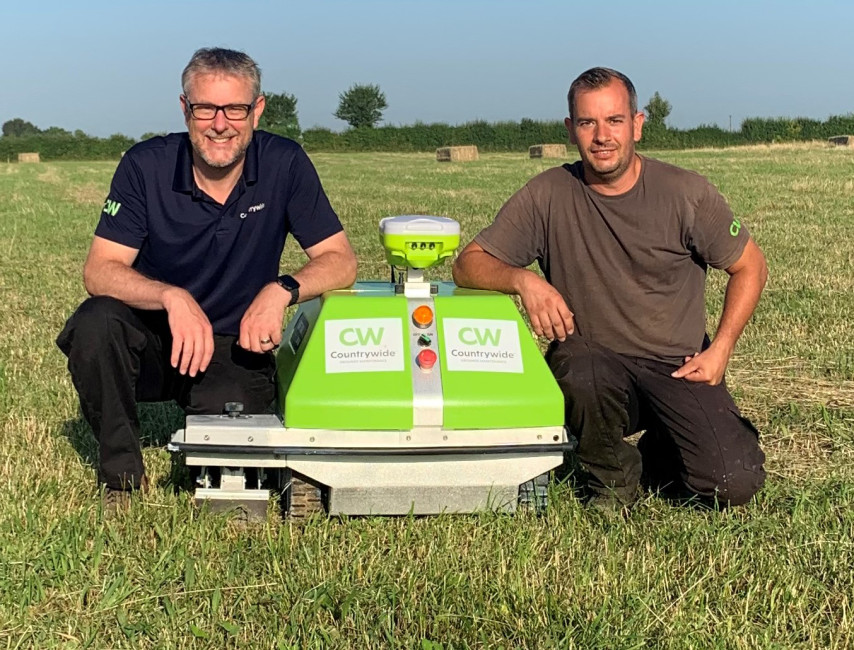 Adrian Sargent, Regional Manager for Countrywide Grounds Maintenance Ltd - Wiltshire, explains: "Schools can be quite unique sites where they have to cater for several different sports in the same area, and often that will mean reconfiguring markings to fit the space."

"We've seen this, especially in the summer when it comes to marking out for athletics and, with one person taking responsibility for all the marking, we wanted to lighten his load but not sacrifice on the quality. For us, that was the primary thing and, before we looked at what the market had to offer, I'd already decided I wanted a robot that came with a base station."

"For me, it's essential if you want to achieve the accuracy and consistency we need, and there were no other manufacturers out there that could match it. We tested the Turf Tank, and the performance was excellent. The speed was what we were told, pitches were marked out quickly, and the reduction of paint usage was also in line with what we expected."

"Come September, we will be marking, football, rugby, hockey, and schools are also looking at more unusual sports such as lacrosse and baseball and, because of the versatility of the robot, we can cater for that."

For those that use it, the Turf Tank is clearly a tool to improve their efficiency and output rather than a reason to reduce the number of staff. Ultimately, like most machines in this trade, it is a tool that still needs human interaction to make it work, but it can operate with impressive consistency to do a job, like so many others, that always needs to be done.