TurfTrax workshop explores 'what lies beneath'

The first in a series of workshops aimed at providing solutions to key turf troubles was held at Leicester City's Walker's Stadium yesterday.

The event, one of a number being held at sporting venues across the country, was hosted by Turftrax Ground Management Systems, who provide precision analysis of sports and recreational surfaces using non-invasive scanning technology. 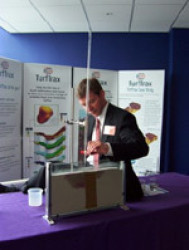 Following an introduction by Sales & Marketing Director Colin Hood, Justin Smith, TurfTrax's Managing Director gave an insight into the economic consequences of poor pitches. He gave some starting statistics, saying that an abandoned test match costs £4 million, a major horse race £17 million and a Premiership football match £0.5 million. With regard to surfaces causing injury, he went on to say that an injury to the likes of David Beckham might cost £20 million, while a fatal injury to a race horse might cost £10 million.

There's also the question of days of lost play due to poor drainage and he gave an example of a golf course in Ireland that lost 50 days of play last year due to drainage issues.

In questioning why surfaces fail he explained that there were 3 major factors: 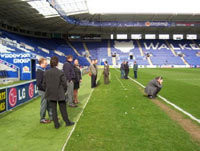 Alex then took the floor to guide the audience through assessing and confirming soil and water problems. His key message was that Groundsmen and Greenkeepers needed to understand their site in order to manage it effectively. Questions were taken from the audience and, following a buffet lunch, Leicester City Groundsman Eddie Mowe took the delegates down to pitch side to inspect the surface at the first division club.

TurfTrax are running 5 similar free workshops this week. For your invitation, contact Sarah Mason on 01234 821750 or e-mail sarah.mason@turftrax.co.uk