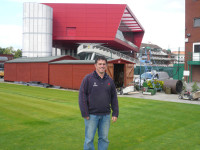 The next phase of one of cricket's most ambitious and extensive pitch reconstructions is back on track after an early scare that nearly 'Yorked' the entire project.

Uncertainty hung over the £0.5m pitch redevelopment at Old Trafford, home of Lancashire Cricket - only weeks before the work was scheduled to start, as problems with the retail expansion planned for the ground halted all building works.

In the middle of September, Head Groundsman, Matt Merchant, named his chosen contractors to handle the crucial first stages of the 900 realignment of the main square, and as Bancroft Amenity Sports Contractors, a Manchester-based firm with lengthy experience in pitch renovations, duly prepared themselves to go on site.

One of five companies to tender for the contract, Bancroft were set to begin work on 20th September but, at the eleventh hour, one of the supermarket developers that had unsuccessfully bid to build one of its stores at the ground, lodged a counter claim to be part of the £32m development and threatened legal action against the club, forcing Communities Secretary Eric Pickles to take another look at the plans. 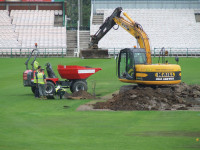 Lancashire County Cricket Club and Tesco were given planning permission in March, when a rival bid from White City Retail Park's owners, Derwent Holdings Ltd, was rejected at the same meeting.

"We were concerned that if the investigation by Eric Pickles did lead to further examination of the planning, it could have delayed work by up to twelve months while a second decision was made," explains Matt.

Eager not to lose momentum for the project and fully aware that, with the autumn weather approaching, time would not be on their side, Bancroft took the decision after the second week of waiting to koro the existing twelve wickets, on the basis that, if the worse case scenario kicked in, at least the strips would be completed.

"We didn't want to start turning any of the square before we got the word, but were keen to at least get something done," adds Matt. "We couldn't sit around and wait any longer."

Ten days after the inquiry started, the decision was taken that no further action was needed, and there was nothing untoward with either Tesco's planning application or the £20m they donated to Lancashire CCC. 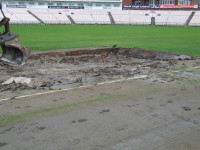 This allowed Bancroft to start work on, what was, one of their most ambitious and unique construction projects to date.

"We first received the call from Matt in mid-September, asking if we were interested in putting in for the job," explains John Bancroft, managing director of the company. "We leaped at the chance to do the work once we'd seen the specification and the fact that it was a local job for us."

Among the five tenderers, Bancroft won over Matt for a number of reasons, he explains. "The prices were all fairly comparable across the board but we chose Bancroft for three prime reasons. They had very good references, a wealth of experience, and they were local."

Despite having carried out pitch reconstruction at a number of club and county level sides, as well as most recently the Malahide Cricket Club in Dublin, home to the Irish national side, Bancroft saw the Old Trafford job as a once in a lifetime opportunity.

"Built on a stone base, the drainage was one the major challenges," notes John, "and one that, due to its scale, would mean a club of smaller stature than Old Trafford would never have been able to afford, either financially or in terms of the loss of the ground." 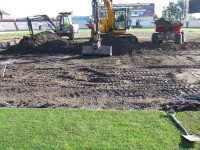 From koroing off the squares, through to laying the loam, bringing up the levels, to topdressing and final seeding was scheduled to take only two weeks to complete, with handover planned before the end of October.

Yet, the delay had set things back further and, thanks to the notoriously wet Manchester weather, the team had been up against it to get the work finished before the rain set in.

Once the green light was given, it was all hands to the pump for the Bancroft team and Matt, who began work on the following Tuesday. The urgency was such that the contractor doubled up on all equipment and manpower to the point of saturation.

"Our concern, at the time, was the fact that our window for completing the works had been significantly narrowed and we were seriously doubting the ability to get it all done in time," John recalls. 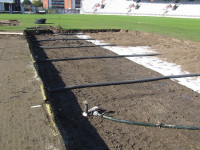 "We had to bring in extra lighting and work into the night and on the weekends to get the work done as, once heavy rain set in, it would become impossible to work with the loam."

Diligence and commitment all round helped ensure that any delays due to inclement weather were averted, and the job was ready for seeding in under a fortnight.

A Blec Lasergrader with GPS was brought in, which allowed the exact requirements for the levels to be met. "Matt specified that the test match wickets should be slightly higher than the others to avoid the chance of any water getting on to the wickets when the covers are on," explains John.

The previous irrigation and drainage systems and chambers were all removed, and inert material and stone imported to fill in the space. 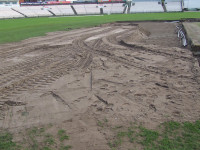 Aside from the early blips, the Old Trafford job has been one of Bancroft's most high profile and fascinating projects, believes John, who notes how intriguing the task of cutting out the square proved to be. "It's been like looking at a piece of cake, seeing all the different layers, each one charting a history of the wickets at Old Trafford. You could see the different styles of construction and how trends have changed over the years."

Since work first began, enthusiasts from within and outside the club have been queueing up to claim a piece of the hallowed turf, which will act as a lasting reminder of wickets that have staged some of the most historic moments in the game.

The volume of loam used has been one of the costliest aspects of the job, with three different grades laid - base, top and topdressing, in order to meet Matt's exacting requirements of the new specification - some 330 tonnes have been provided at a cost of over £35,000.

Once the seed had taken, Bancroft's role at the club was over, and the ongoing work was handed back to Matt and his team, who are scheduled to begin further renovation work in the spring.

MeanwhiIe, Matt has joined his turfcare team at Lancashire's three out grounds to complete pitch renovations that will allow the side to continue playing while work is underway at their home.

Blackpool, which will host one match next season, has seen one wicket relaid; Liverpool, to host five games, is having work carried out on seven pitches and, finally, Southport who are having one wicket renovated ready to host one Lancashire home game later on in the season.