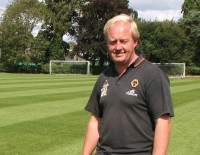 Producing and maintaining sports turf to provide the perfect playing surface takes both time and money. In the current economic climate - where budgets are being cut -groundsmen and greenkeepers are inevitably looking for the most effective and economical solutions to ensure the best playing sports surface possible.

Whatever level of sport is being played, from amateur to professional, a good playing surface will help sportsmen and sportswomen improve their performance, deliver more predictable ball roll and help prevent player injuries. And, getting the turf in top condition on training grounds - which inevitably experience heavy usage - is equally as important as providing an excellent turf in premier league stadia and tournament golf courses.

In the West Midlands, the training ground for Wolverhampton Wanderers has been established for around fifteen years and was launched as the Sir Jack Hayward training ground three years ago with the construction of a brand new building.

Here, the head groundsman, Wayne Lumbard, has three main pitches and a rehabilitation area to maintain in peak condition for regular team training and the Under 16s and 18s Academy. "The main problem we face is the continual usage on the pitches," explains Wayne. "Currently they are played on every day of the week apart from Thursday, and although we try to educate the teams to rotate where they practise there is little time for the pitches to recover. The most wear tends to occur in a diamond shaped area in the middle of the pitch, although if this was a council run pitch the greatest compaction would tend to be in the goal mouth area."

"Our main work regime involves divoting on a daily basis as well as watering, aerating and fertilising as necessary plus scarifying and overseeding on any bare patches that appear. We have been applying a PrimoMaxx plant growth regulator to slow the vertical production of the turf grass and that has reduced the need for cutting from a daily activity to two to three times a week. This has certainly saved us time and money, particularly in terms of diesel and wear and tear on the machinery," explains Wayne. "However, this tends to cause yellowing of the grass, so we have been applying a liquid feed which is quite expensive. That is why we agreed to trial one of Vitax Amenity's amino acid products. The aim was to apply it in mixture with the plant growth regulator on our Academy pitch to see whether it would reduce our costs whilst delivering the results we wanted in terms of the turf condition and appearance." As Glen Howard, Technical Sales Adviser for Vitax Amenity explains, "Amino-sorb F contains high quality amino acids which play an important role in the leaf function of the plant, improving chlorophyll synthesis during photosynthesis and enhancing the thickness of the cells, so helping to strengthen the plant's health. It also helps to improve the uptake and efficient use of fertilisers, fungicides and herbicides and plant growth regulators i.e. it has a synergistic effect so helping to reduce rates and so saving on tight budgets."

The trial started at the Wolves training ground two weeks after the pitch had been renovated and was showing signs of growth and coverage. The application took place on 8 July 2009 when a tank mix of a plant growth regulator at half rate (0.8 litres per hectare) was applied along with 5 litres per hectare of Amino Sorb F.

The response to the treatment was assessed on a weekly basis. The results have clearly shown a marked improvement in the visual appearance of the turf. As Wayne observes, "We were applying PrimoMaxx which caused yellowing of the grass. We then needed to add a liquid fertiliser to stimulate growth and retain the greenness, but this was really going against what we were trying to achieve with the Primo and it was costing us money." 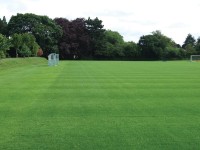 "The results using Amino Sorb F have been very good. There was a noticeable improvement one week after the treatment and now the visual appearance of the turf is excellent. We are also keeping well on top of the growth by only cutting twice a week instead of four to five times a week. So, as well as saving on the products, we are making savings on the mowing operation, which is freeing up staff time to spend on other essential maintenance activities," reports Wayne.

As the Amino Sorb F helps to produce a healthy plant so less supplementary nutrient in the form of fertiliser will be required. Healthy plants are also more likely to be tolerant of drought conditions and less prone to turf diseases such as anthracnose and dollar spot, which tend to affect stressed grass plants.

As Wayne concludes "We've certainly been very impressed with the product. It has helped both us financially and in time management. I'd say that, if you want to turn your turf around and provide a quality looking pitch then it will help you achieve the maximum performance at an affordable price."