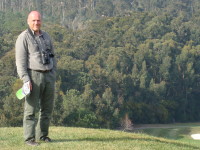 "I once successfully campaigned against expansion of a local golf course, long before I came to work in the field - if only I had known then what I know now about what golf can offer to improve our countryside and, ultimately, the environment"

Winning the 2011 Conservation Greenkeeper of the Year award has got to be my greatest professional achievement to date, and I am honoured and proud to have received this accolade.

During my six years here at Turton Golf Course, conservation and enhancement of our out-of-play natural habitats has been my main focus, as they offer refuge for native wildlife whilst playing a vital role in the character of the course. My fascination with improving these habitats stems from thirty years of learning about nature, especially birds, and observing the gradual decline of some of our once common species. In fact, I once successfully campaigned against expansion of a local golf course, long before I came to work in the field - if only I had known then what I know now about what golf can offer to improve our countryside and, ultimately, the environment.

Turton Golf Course is situated on the southern slopes of Turton Heights, above the town of Bolton, and offers stunning panoramic views of the town below and surrounding hills, including five counties.

Nine of the holes were constructed in 1908 with the further nine completed in 1996, which has resulted in the course having a distinct difference between old and new areas, where more mature plantations and moorland grasses predominate at the older holes. The age of a golf course is an important factor in 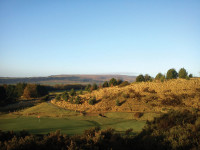 determining its value for wildlife, as ecological value increases with age due to the maturity of wildlife habitats.

Although Turton is a predominantly 'moorland course', there are a few holes that could be considered 'parkland', especially on the lower reaches. The total area of the course is fifty-six hectares, of which are twenty hectares of prime habitats such as heath, moor, beech woodland, acid grassland and five ponds. These habitats form a substantial part of the course, and it is these which I have managed over the last few years that have no doubt helped the club to offer something different for golfers to enjoy - a thriving wildlife community that contributes to improved aesthetics, appearance and a better playing experience to our members and visitors alike.

All I have done is to 'work with the land' we have to maximise the potential for wildlife and, therefore, provide a course that blends in with the surrounding environment. This involved various management strategies within specific areas of the course to preserve and enhance our habitats.

One project was to maintain our already abundant heather and try to encourage new heather regeneration in key areas, such as carries and the course boundaries. Admittedly, this was quite easy in some areas as there were individual heather plants trying to grow in areas that were intensively managed, showing that there is a healthy heather seed bank within our soil. 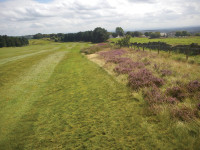 All we did here was to leave these areas to grow and, hey presto, we now have new areas of heather.

Other areas weren't so easy due to a very healthy sward of moorland grass species, so we trialed a small area where we removed the turf to the point where the humus layer was revealed, thereby exposing the seed bank. Heather has started to colonise these areas now, two years on, showing that the method works, albeit very slowly.

Another key habitat present within our boundaries is 'lowland dry acid grassland', which hosts a thriving wildflower community and has largely disappeared from our countryside.

Management of this habitat required strimming of vegetation and subsequent removal of the clippings so as not to increase fertility of the soil here. Timing is imperative so as to not impact upon the invertebrate and flower populations, and work commenced during the autumn, after the first frost, when most of the invertebrates had retreated away from the cold and vegetation growth had ceased. 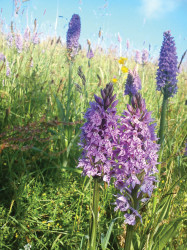 Strips of vegetation were strimmed, about three metres wide, leaving a mosaic of strimmed and unstrimmed areas, so as not to completely remove the vegetation and allow somewhere for creatures to reside. The strimmed areas are rotated annually, in such a way that the whole of the acid grassland receives this treatment over a period of three years, before we start it all over again.

This management removes fertility from the soil, thereby preserving this very important habitat that is full of colour throughout the summer.

Heathland is another important habitat in Britain, which, along with most other habitats, has decreased dramatically over the past century. Luckily, at Turton, we have a considerable amount which forms the main out-of-play areas on the course.

It is home to heather, bilberry and gorse that, in turn, provide food and shelter for a host of birds, mammals and insects. Deer, badger, weasel, stonechat, grasshopper warbler and bard owl are just a few species which inhabit the heath and, without proper management, would revert to woodland, and the heath would be lost. 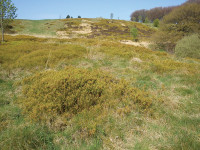 However, management of the heath is not quite as time consuming as it would first appear, as we only need the scrub and tree saplings to be kept in check. Here, we removed some, not all, of the older hawthorn and mountain ash (rowan) and simply snipped any tree saplings. This management helps prevent shading of the vegetation below, thereby allowing heath species to thrive. Now, all the largest trees and shrubs have been removed it is simply just a walk through the area once a year to clear any new saplings.

Providing nestboxes for birds is another measure we have taken to ensure a healthier population of those species that have a limited availability of nestholes in which to raise their young. Boxes have been placed on the course for blue, great and coal tits, and robins, with further plans for boxes for barn owls, tawny owls, kestrel and nuthatches.

We have had major success from eighteen boxes erected, with a total of at least seventy birds reared from ten of them during 2010 and 2011. Little Owls have also bred successfully for a number of years now in a cavity of the clubhouse, cheering those up who are lucky enough to see them during the early morning. 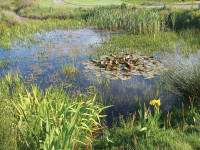 management and a bat box scheme, amongst others, and we have a complete management plan that recognises the need to think about the ecology on our course.

This is all documented and planned for in a full ecological appraisal I wrote for the club which asked the questions; what do we have at the club in terms of wildlife habitats? And what do we have to do in order to preserve or enhance these areas? So, if you are thinking of going down the environmental road in your future greenkeeping career, then I think you're half way there if you can answer these two questions.

Recognising the importance of some of the habitats we have, I also worked with Lancashire County Council to achieve the official title of Lancashire Heritage Site/Biological Heritage Site (BHS). There are now ten hectares of our course that have received this designation, whereby management regimes described above have been initiated.

Local authorities are required to identify and provide for the protection and enhancement of the natural heritage within their areas and so promote the BHS scheme. As part of their planning function, they have a responsibility to take account of sites of significant nature conservation value. 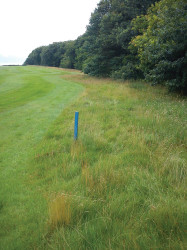 All of the above has helped me gain this fantastic award, but I wish to thank a few individuals who have made this possible. Firstly, thanks must go to our Head Greenkeeper, Chris Westwood, who really helped to get the ball rolling by convincing the greens committee to adopt an environmental policy, and allow me to execute a strategy to improve the ecological value of the course. Without him, I simply wouldn't have been able to advance my experience of golf course ecology.

Thanks also goes to the Greens Chairman, John O'Hara, and the whole team up here at Turton who have supported and adopted new environmental initiatives.

Finally, I don't think anyone would disagree with me when I say that there has never been a more important time to focus on ecology and to minimise the carbon footprint we leave for our children to inherit.

Far too much valuable land, which once provided natural habitats for native British flora and fauna since time in memorial, has been lost to us - 97% of England's traditional wild flower grasslands have disappeared, for example. The result is a comprehensive list of various species of flowers, plants, animals, birds, insects and other organisms whose numbers are in a steep decline.