When Celtic Manor Resort staged the 2008 Wales Open on its new Twenty Ten course, the scene was set for a run-up to what many believe will be the venue's crowning glory - hosting the Ryder Cup in 2010.

With Colin Montgomerie newly confirmed as Ryder Cup captain, the build-up to Europe's bid to wrest the trophy back from the US begins in earnest this year as the Newport resort warms to the challenge of seeing the world's golfing elite compete on a course constructed specifically for this tournament.

When the media extravaganza descends on Wales next year to cover this oldest of transatlantic golfing rivalries for the first time in the Principality's history, Celtic Manor will be ready and waiting, thanks to the considerable experience they have already amassed in helping it feed the insatiable appetite of a global audience.

The Wales Open proved a fitting rehearsal for 2010, confirms Jim McKenzie, Director of Golf Courses and Estates Management, giving management the chance to sort out fixed camera positions, cabling and the daily demands of the world's media.

But preparations for the Ryder Cup are beginning many months before a ball is struck off the first tee in competition. Planning for media coverage is "well-advanced", according to Jim,

"The vast majority of the facilities that come on to the course to cover the event are temporary," says Jim, "from the media centre used by TV and radio for interviews, scheduled to be sited on the right hand side of the first fairway, to camera cranes and gantries and the kilometres of cabling that line the fairways."

The likes of Sky, the European Tour and Ryder Cup Ltd will be 'reccying' the site to establish the most favourable camera positions well before the Ryder Cup tournament tees off next September, and Jim will be playing an active role in consultations with them to establish what is possible and what is not.

Celtic Manor boasts some of the most dramatic inland golfing holes in the UK, so the potential for unusual, not to say unique, views of sporting action is huge. Nearly a million tonnes of rock was hewn out of the River Usk Valley to create the Twenty Ten course, a monumental task but one in keeping with the scale of the site and the vision of the resort.

"We strive to be as accommodating as we can," he explains, "but there are some issues to discuss, such as the positions of fixed cameras on the course and the increasing use of hand-held ones."

Flexibility is the key in such negotiations, Jim contends. Work on the course has to take account of factors such as the media's need to nail the best possible camera angles for coverage. "If we are planning any changes to the course, such as fairway shapes, clearly that could affect camera positions, so we will talk through any plans well beforehand."

Jim and his team go to great lengths to ensure optimum coverage of any event, cutting off tree branches that might be interfering with the view down the course for instance.

The commitment to communications is 'massive', Jim acknowledges. "It's a question of ensuring that we have a backbone of operations, facilities and a full IT department."

The incident when the Internet went down at the Wales Open "cannot happen again" says Jim. "Too many people were using it on site, but we had back-up and that got us up and running again quickly." The newly upgraded IT and communications system at the resort should ensure such a potential catastrophe is not repeated.

As the owner, sponsor and promoter of the Wales Open tournament, Celtic Manor Resort wants to put on as good a show as it possibly can, Jim maintains.

"A total of 120 countries televised the event last year, with 20 to 25 hours of live television broadcast, including the Golf Channel in the US and Sky's Golf Night programme. When you compare that amount of coverage with what it would cost in advertising, you can see how much it means to us to get everything just right. It's a big marketing exercise for us and one that we have to take full advantage of."

Jim is blessed with one of golf's great opportunities to delve beneath the surface to inform an increasingly knowledgeable audience about the myriad factors that impact on the game.

"I do quite a lot of TV during the Wales Open," he says. "We have forty-five to fifty greenkeepers working on the course, so there's ample scope to produce an interesting piece.

"Lots of times during the day there is nothing going on, or perhaps nobody is making a move through the field. That's when I give the media the story of Celtic Manor Resort to get our message across. Live coverage is not all about golfing action."

The tale of telecommunications tycoon and resort-owner Sir Terry Matthews' birth at the former nursing home on the site (now the headquarters of the Wales Golf Union) and his mission to create 'golf for everyone' on such a titanic scale is miraculous enough, but Jim then focuses on the game in hand.

"I'll comment on the condition of the greens and the types of grass grown on different parts of the course - that way we are informing the public about the factors on course that influence play. It's important that we try to get the media to say something that we want them to say. We understand that they are the conduit by which we convey our message to the rest of the world. That's why we aim to look after them."

Celtic Manor's hospitality for the Wales Open extends to press days, when the media are invited to the resort for briefings and a chance to look over the course, Jim explains. Good relations with the media are paramount he knows only too well. "One bad comment is all it takes to ruin a good reputation," he states.

Last year, for example, persistently heavy rain was followed by warm sun, creating a surge in grass growth, and the opportunity to explain why greens might be slower because of the weather. Factors such as these can create added colour, filling out the story for viewers.

Still some twenty months away, The Ryder Cup is promising more fixed and hand-held cameras to cover the action than ever before, so the preparation has to be that much more 'belt and braces'.

"At the Wales Open, only the leaders were followed using hand-helds but, for the Ryder Cup, they look likely to be used throughout the event." This can place added pressure on the groundstaff, Jim points out.

Six to eight days out, scaffolding will arrive on site, the backbone of the temporary structures for television cameras. The weekend before, cables are laid through the rough to the camera towers. On the Monday and Tuesday of that week the cameras and production teams start to appear to test positions for the best angles.

And it's now that groundstaff begin to interact with production crews a little more intensively as the demands and timetables of the hosts and the media start to mesh.

"Cables positioned in the rough can cause us problems," Jim admits. "We'll want to cut the areas of long grass the weekend before the tournament starts but risk slicing through cables if we do."

The problem rose to a head at last year's Wales Open when heavy rain followed by fierce sun prompted a two to three inch spurt of grass growth just before the event began. We had to cut the grass to manageable heights but, with the best will in the world, there's always the risk of damaging a cable," which is what happened. The TV guys were not best pleased.

We had words," Jim recalls, "but they understood our position in having to carry out essential work and we understand that they have a big job to do too."

The advent of heavier duty, more expensive high density cable a couple of years ago has brought this aspect of media management more sharply into focus, making it all the more important that mishaps such as this are avoided, Jim stresses, before adding on a positive note: "The practice run at the Wales Open means that, when the media return for the Ryder Cup pre-tournament 'reccy', many of the teething troubles will have been sorted out already."

Nevertheless, the many kilometres of cabling, mostly following the ropes that cordon off spectators from the course, seem somewhat precariously exposed. In some cases, rubber covers are placed over cabling where it crosses paths and, in others, special H frames are erected to take them over roads. Conduits have been laid underground when a couple of roads were resurfaced recently, but the vast majority of cabling is laid above ground. But the system clearly works.

What worries Jim more it seems is the ingress of hand-held cameras into locations on the course that fixed ones can seldom, if ever, penetrate.

"There's no place on the course that a hand-held cannot access," he states. "That creates additional stress for us because it exposes parts of the course to the intense scrutiny of a worldwide audience."

He then recounts the case of one US course that was staging an international tournament. Hand-held cameras followed play into the trees to peer at a player trying to thrash his way out on to the fairway. But, in doing so, the viewing audience were also treated to the site of tree branches and debris strewn about that had not been cleared, and which showed the course off in a poor light.

"There is no part of the course that we can ever take our eyes off," says Jim soberly. "You like to think you can breathe easily, but all sorts of strange occurrences are possible that serve to put the spotlight on us."

He returns to the issue of hand-helds. "Use of a hand-held camera usually means one cameraman, and at least one sound engineer, jumping on and off a buggy." Ideally, the rough is the best place for buggies, he adds, but that's not always possible, he concedes, when the media are screaming to capture the best angles for coverage. 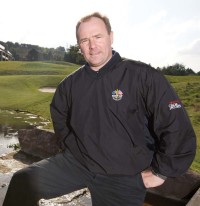 Work during events is conducted round the clock to ensure the media are happy. The sheer weight of numbers tramping around the media centre and other parts of the course mean some remedial work may be necessary, Jim explains. Putting down chip bark to minimise bogginess or laying it around diesel generators are typical, he says.

But he is quick to differentiate his Ryder Cup and Wales Open roles. "We are a partner in the former, and must always be acutely aware that the Ryder Cup does not belong to us. When the Wales Open is staged, in a way, we have carte blanche to promote the event how we want and to our best advantage."

Jim is "absolutely delighted" that Colin Montgomerie, captain of the All Stars team at Celtic Manor, has been named Ryder Cup captain. It seems appropriate too, not least because one of the Resort's three championship courses is named after him. In a sense, 'golf is coming home' in 2010 perhaps.

Speaking to Jim, candid as he is about the pitfalls of accommodating the media, you nevertheless are struck forcibly with the conviction that for him and his team, and all at Celtic Manor Resort, only the greatest show on earth will suffice when "the big circus" rolls into Newport.