Ed Carter - not a fan of Cliff Richard, apparently, although he is partial to a bit of Castrol R! 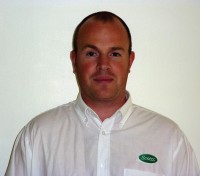 Who's your hero and why? The late Peter Wheeler. Gentle giant and man of the people. In the 80s he bought the ailing TVR car company because he wasn't happy with the car they sold him. He developed beautiful affordable sports cars that gave power to the people. In the 90s he turned the company around taking an order at the Motor Show every eight minutes with strap lines including, "There's no bullshit in our cars!".

What is your dream holiday? Exploring more of Australia and New Zealand. I spent a year in Australia and then returned recently on Honeymoon. It's a fantastic country with great people, however, it's a bloody big place and there's a lot more I'd like to see.

What annoys you the most? Red Tape and shmoozers.

What would you change about yourself? Lots of things but hopefully nothing too fundamental.

Who wouldn't you like to be? Cliff Richard's biggest fan!

Favourite record, and why? Far too many to choose from and varies day to day depending what mood I'm in. If I have to choose just one then I guess "Everlong" by the FooFighters is probably up there for its sheer energy.

Who would you choose to spend a romantic evening with? My wife. Seriously!

If you won the lottery, what is the first thing you would do? Laugh out loud, then off to the pub with the classifieds section of Fine Homes and Motorsport magazines.

If you were to describe yourself as a musical instrument, what would you be and why? Charlie Watts' drum kit from the Rolling Stones. What you see is what you get.

What's the best advice you have ever been given? If ever you find yourself being attacked by a shark, just punch it on the nose and it'll go away!

What do you do in your spare time? I have a real passion for motorsport/sportscars. My dad used to race at a grass roots level so it has always been in the family. I'd like to have a go in the future but any form of motor racing, even at entry level, can get expensive and time consuming.

What's the daftest work related question you have ever been asked? Will it be ok to spray selective herbicide in frost?

What's your favourite piece of kit? The Stimp meter! (only joking !).

What three words would you use to describe yourself? Enthusiastic, honest, straightforward.

What talent would you like to have? I would love to be able to play the guitar. Tried once or twice before but have neither a natural talent nor sufficient patience.

What makes you angry? Injustice! You should get what you deserve be it a gold medal or a fiery end!

What law/legislation would you like to see introduced? A law that stops any future laws being introduced that are of the ridiculous nannying type we've become accustomed to.