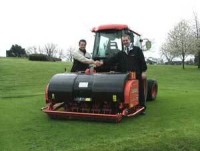 Twenty greens hollow cored to a depth of 7" (180mm) in a single day, now that's quick! This remarkable feat was the result of efforts by Brett Cox and his greenkeeping team at Welwyn Garden City Golf Club following the recent purchase of a Wiedenmann Terra Spike XF deep aerator from local dealer Ernest Doe & Sons.

The Terra Spike XF is the latest development from the specialist aerator manufacturer and is claimed to be three times faster than competitor machines. It was launched in the UK nine months ago following three years of extensive research, development and testing in Germany, UK and USA.

Not only has the XF performed well on the greens, it has also been eating up the fairways, with four being aerated in one day.

Commenting on the new machine, course manager Brett said,
"The speed of the XF was the main factor in our purchasing decision. Because of its output we were able to trade in our two older machines; it does all that they did and quicker. We took our time selecting the right machine and had the XF back on two occasions. Chas Ayres from Wiedenmann UK demonstrated it on the greens with 5mm and 8 mm needle tines and then again on the fairways with 20mm tines. The main advantages of the XF apart from its productivity are the variety of tine options and the minimal maintenance requirements.

"The majority of our greens here are soil based and over 80 years old. We have worked hard over the past 4-5 years to eradicate thatch, so after hollow coring we top dress, and then scarify using our Graden machine which helps close the holes as well as removing the thatch. We have also been paying particular attention to walkways and other worn areas around the course and following the use of the XF we have no ground under repair at the moment."

Brett Cox joined the club as a trainee greenkeeper in 1991 and was appointed Course Manager in April 2000. He obtained his NVQ Levels 1, 2 and 3 in Greenkeeping and Sports Turf Management at Oaklands College and is currently studying Level 4, the supervisory and management discipline.

Welwyn Garden City Golf Club is probably best known as the club where Nick Faldo learned to play golf. Today it is 6,098 yard off the back tees with the 600 yard 17th being one of the longest holes in Britain.