Chris Cooper - an attentive petrol head who needs to change his diet! 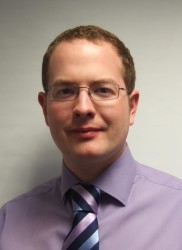 Who are you? Christopher Cooper, Product Manager, Hayter Limited.

Family status? Engaged to be married in July 2011.

Who's your hero and why? Winston Churchill. A great individual who knew how to inspire people and was a great leader.

What is your dream holiday? Anywhere where it's hot and there's miles of sandy beaches, clear seas and plenty of time to relax in isolation away from the hustle and bustle. Greece or the Caribbean sound good.

What annoys you the most? Standing in supermarkets queuing at one of a handful of open tills at the busiest time of day, whilst the remainder stand closed and the staff stand around doing nothing.

What would you change about yourself? My appetite!

Who wouldn't you like to be? A politician - it doesn't matter who, they're all one and the same.

Favourite record, and why? I don't know - there are loads of songs that I like equally, but Ring of Fire by Johnny Cash is always a good one that springs to mind, as it reminds me of many good nights out with friends at parties with live music.

Who would you choose to spend a romantic evening with? My fiancée of course.

If you won the lottery, what is the first thing you would do? Run into the middle of the street and shout about it, then go on a really long holiday.

If you were to describe yourself as a musical instrument, what would you be and why? My fiancée thinks a trumpet - but I can't think why!

What's the best advice you have ever been given? Don't put all your eggs in one basket!

What's your favourite smell? Strangely, the smell of Rolls Royce Merlin engines starting, and the smell of fuel, glycol, oil and everything else.

What do you do in your spare time? Loads really - ride my bicycle, read books, mess about with my car, go and watch motorsport, airshows etc. Go to car shows with the Mini car club I helped found in 2007. I also get involved with anything to do with World War II. I love reading about it, understanding the facts and true stories, visiting battle sites etc. I love surfing but it's very difficult to make that a regular thing considering where I live.

What's the daftest work related question you have ever been asked? Not a question, but I had a customer come up to me at the Chelsea Flower Show one year who started to complain about an aspect of one of our products. I was rather baffled at what he was saying as I couldn't relate to it. It turned out he was referring to a competitor's product which was of a similar colour. I think he felt quite embarrassed, to say the least.

What's your favourite piece of kit? My car - a Mini Cooper S.

What three words would you use to describe yourself? Attentive, impatient, considerate.

What talent would you like to have? To be able to play the piano.

What makes you angry? People who don't do something that has been requested after they have agreed to do it.

What law/legislation would you like to see introduced? A relaxation of speed limits in road works when there is no-one working.