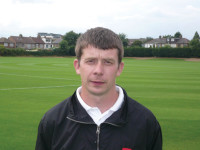 Who's your hero and why? William Wallace. No, seriously, my parents.

What is your dream holiday? Capri.

What annoys you the most? The Barking Road at 5.00pm.

What would you change about yourself? Be able to spend more time at home relaxing.

Who wouldn't you like to be? The Prime Minister (either one).

Favourite record, and why? I don't have one.

Who would you choose to spend a romantic evening with? Politically, the wife, otherwise Louise Redknapp.

If you won the lottery, what is the first thing you would do? PUB!

If you were to describe yourself as a musical instrument, what would you be and why? A drum, because I keep banging on about standards.

What's the best advice you have ever been given? Think before opening your mouth.

What do you do in your spare time? Spend time with the family, or refer to the lottery question.

What's the daftest work related question you have ever been asked? Did you have much time off in the closed season?

What's your favourite piece of kit? My BlackBerry.

What three words would you use to describe yourself? Fair, opinionated, dedicated.

What talent would you like to have? To design a machine that replaces divots rather than twelve hours of hand forking.

What makes you angry? Poor standards.

What law/legislation would you like to see introduced? All paedophiles hanged.