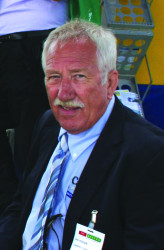 Who are you? Ian Pogson, aka Poggy. Product Specialist with Campey Turf Care.

Family status? Married, two children - one of each.

Who's your hero and why? Don't have heroes, yet!

What is your dream holiday? Elounda Bay Hotel in Crete.

What annoys you the most? Pompous, self important people.

What would you change about yourself? My age, I'd like to be younger, 20 years would do.

Favourite record, and why? I don't have an all time favourite, but I like guitar based rock and grew up with skiffle, so it could be one of several in those categories. If pressed, I'd say Romeo and Juliet by Dire Straits, maybe. Why? Because I just like it.

Who would you choose to spend a romantic evening with? Other than my wife, the Corrs (less one), or Suzi Perry.

If you won the lottery, what is the first thing you would do? Pay off my kids' mortgage.

If you were to describe yourself as a musical instrument, what would you be and why? Sharon Corr's fiddle, or her cello preferably - just think about it!

What's the best advice you have ever been given? Believe - you have got to believe, and be the best you can be.

What's the daftest work related question you have ever been asked? Can't think of one that stands out of the many, but I was once asked at a show, when I worked for Iseki tractors and was stood by one, what it did? As it was the Royal Cornwall Show, and near the coast, I told him it was a lifeboat.

What's your favourite piece of kit? My Swiss army knife.

What three words would you use to describe yourself? "Bloody nice bloke"!

What talent would you like to have? To be able to play a musical instrument.

What makes you angry? Political correctness and business jargon.

What law/legislation would you like to see introduced? Ban the above and make commonsense compulsory in education and in the work place.