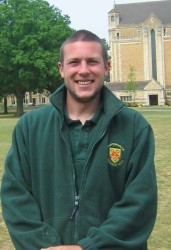 James Bourgeois - Annoyed by Sunday drivers and speed limits, but with a soft spot for The Queen!

Who are you? James Bourgeois, Lead Groundsman Cricket at Charterhouse School.

Who is your hero and why? Peter Pan, the boy who never grew up - ask Jo!

What is your dream holiday? One that never ends!

What annoys you the most? Sunday drivers.

What would you change about yourself? My receding hairline.

Who wouldn't you like to be? A fly on a windscreen.

Favourite record and why? Snoop Dog's I want to make you sweat. Enough said?

Who would you choose to spend a romantic evening with? The Queen!

If you won the lottery what would be the first thing you would do? Have a massive party for about a month.

If you were to describe yourself as a musical instrument, what would you be and why? A drum kit because, no matter how hard you hit it, it still plays a tune.

What is the best advice you have been given? The worse it looks, the better it will be - Bill Clutterbuck on end of season cricket renovations.

What is your favourite smell? Freshly cut grass in the morning.

What is the daftest work related question you have ever been asked? Which way up does the turf go?

What is your favourite piece of kit? Toro Flex 21 Sidewinder.

What three words would you use to describe yourself? Enthusiastic, motivated, fun.

What talent would you like to have? To be able to juggle.

What makes you angry? People not picking up dog poo from sportsfields.

What law/legislation would you like to see introduced? Speed limits increased.