Steven James - doesn't want to be Brown, but likes the smell of getting brown! 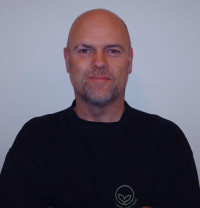 Who's your hero and why? Mahatma Gandhi. He brought about much needed change for his country and tried to do it peacefully.

What is your dream holiday? Probably to go back to Australia and visit the places I did twenty-odd years ago.

What annoys you the most? People who see things only in black and white.

What would you change about yourself? Get more sleep and learn Norwegian properly!

Who wouldn't you like to be? The prime minister or other high ranking politicians. It seems like a thankless task to be involved in the world of politics.

Favourite record, and why? Too many to mention, but probably something from The Who.

Who would you choose to spend a romantic evening with? Ha ha.. Anyone?

If you won the lottery, what is the first thing you would do? Work out who I would be giving money to and how much they would deserve!

If you were to describe yourself as a musical instrument, what would you be and why? A drum kit. Can be very loud on occasions and very quiet at other times.

What's the best advice you have ever been given? "Sleep on it".

What do you do in your spare time? Spend too much time on the internet!

What's the daftest work related question you have ever been asked? An obvious one, but get asked all the time, "how do you get the stripes in the grass?"

What's your favourite piece of kit? The trusty mower.

What three words would you use to describe yourself? Young at heart.

What talent would you like to have? To be more musical. I have a set of drums but can't really play them properly.

What makes you angry? Narrow mindedness.

What law/legislation would you like to see introduced? No Christmas related items allowed in shops until after the 1st of December.