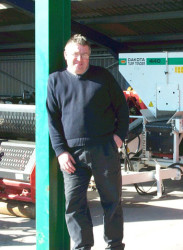 Richard Campey started his working life in farming before taking a career change to join ICI. In 1976, as a 22 year old, he moved to SISIS working under the redoubtable Eric Staniforth, founder of the company. It was here that Richard fell in love with turfcare machinery. He was able to travel the world as a sales demonstrator, all the time learning from his straight talking mentor.

In 1986, Richard decided that it was time for another change. He set up his own company, Professional Turf Care, to carry out sportsturf contracting in and around Manchester. It was a lucrative area and it was at the same time that Richard saw a niche in the second hand market place.

Richard moved to his present location, just outside Macclesfield, two years later and the company and premises have gradually expanded year on year. His regular dealings with customers in the second hand market led to him fulfilling local demand and, eventually, taking on new machinery stock.

Richard said, "We were far too small a company at the time to take on products from the big three, but we did have a chance to work with some of the smaller manufacturers."

"I was down at Saltex in 1989 looking at an Australian Coremaster, when Colin Gregory jumped out at me. 'You'll be after buying one of these then Richard?' to which I replied, 'it looks like a machine that will make us some brass, but unfortunately I haven't the funds to buy it.' Colin said, 'don't worry about that, and you'll be needing an Iseki tractor to pull it too!'" 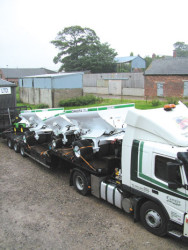 "Well that was that. Suddenly I was dealing in new machinery. We next took on the Lesco range and, in the first year, sold thirty five machines in the North West. But I was struggling to cope so, in 1990, I took on Tony Cundall as a sales rep and Ken Heath, who I knew very well from my SISIS days. Ken had retired, but was still passionate about the industry and was looking for some part time work. The other key member of the team back then was Jane Middleton, a local girl, who started doing my book keeping. She is still with us as Company Secretary to this day!"

"In 1994 Iseki went to Massey Ferguson, so I approached New Holland/Ford and became the local dealer for them. Trimax, who had previously been distributed by Saxon, launched their UK company in 1996 and they were also added to the fold."

At this time all the machines that Richard was promoting, demonstrating and selling were under dealer licences. Richard is always keen to attend equipment shows, both at home and abroad. and it was at the GCSAA Exhibition in the USA, in 1997, that he first saw a Koro machine.

"I was very impressed with the machine's simple, yet effective, design and when I went back to the GCSAA a year later I spoke with the Dutch manufacturer and found out, to my surprise, that nobody had taken the rights for the UK and Ireland. As a contractor I could immediately see a good market for them." In that same year the Koro Field Topmaker was stripping off the first football pitches in the UK courtesy of Richard Campey. 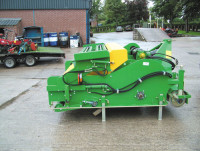 Next to catch Richard's keen eye was the Dakota range of top dressers and, in 2001, a distribution deal was agreed, but this time with European rights included. By the start of this year, Dakota top dressers have been sold into twelve countries and over four hundred machines have gone through his Cheshire premises.

In addition, Campeys are adding to their own Raycam range of innovative products including Hi-lift Trailer, Striegel Harrows and Speedresser large capacity drop spreaders.

Campey Turfcare employ twenty four staff, five of whom are dedicated to sales.

The passion for the industry, gained from his early mentors Eric and Ken, has obviously rubbed off on Richard, who talks with immense enthusiasm. "I want to see the quality of sportsturf improved but my biggest bug bear is the local authorities. Standards need to be raised. People bang on about the Olympics changing the industry's perspective but will Joe Public learn more about the work we all carry out? No."

"Education needs to start in schools, with more work experience offered. This year we have invited local schoolteachers to a tour of our premises. They can then see at first hand what we do and, hopefully, will go back to school and encourage some of the kids to get involved in our industry in the future."

"I thoroughly enjoy what I do and like to keep 'hands-on'. We continue to develop new ideas and concepts that will benefit the work of groundsmen and greenkeepers. As a company we are always ready for fresh challenges."

"More recently, a new sister company has evolved. TurfWorks was born out of a chance meeting over a pint of beer between John Coleman and Simon Gumbrill. We first got to know John as a greenkeeper, who had moved to Norway to look after a golf course. Our Dakota dealer over there was only a few miles from the course and we subsequently sold him some machinery." 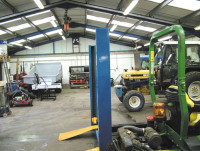 When John moved back to the UK, he went to work with his father at an engineering company. A surprise birthday present that we had to deliver to his father led to the discussions that developed the TurfWorks concept. Since launching, TurfWorks it has taken us onto the world stage and, after the GCSAA show this year, we have sold over 200 sets."

Campey's are always on the look out for new and innovative products, recently acquiring a new rubber Dragmat range. The contracting side of the business was sold to Suiters last year, although a close working relationship still remains. This sale gave Richard and his team the opportunity to concentrate on selling products as well as freeing up much needed space at the premises for more new equipment.

Campey's latest recruit is Rob Jenkins, an Australian with a flair for IT and retail sales. Rob is working very hard to convert Richard to the benefits of information technology.

Richard summed up by saying, "We couldn't have got to where we are today without the help of our staff, many of whom are still with us today. We are a very proactive team. All of us are highly motivated and keen to progress this industry."