by Louise Prettyman
in Machinery & Mechanics
on 28 Aug 2014

0 Twin Turf Tidys for twin parks in the Wirral

Not many parks are twinned, and not with anywhere as prestigious as Central Park in New York, but Birkenhead Park is! To keep it looking as pristine as it's 'twin' the facility now has a Redexim Turf Tidy 3000 to help. A similar machine is helping neighbouring Central Park in Wallasey. 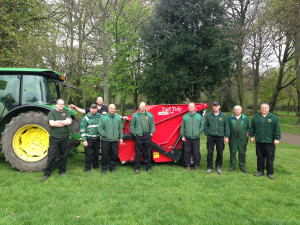 Part of a £2.3million tender for approximately 200 items of equipment covering 43 different types of machinery was a requirement for a machine that could not only cut grass but also collect leaves and litter from large open spaces. Wirral is one of the largest Metropolitan Authorities in the country.

The Turf Tidy was identified as one of the options for that requirement and won out in the final analysis. Bill Hancox is Operations & Support Manager at Wirral Borough Council and was involved in the tender process, "Sharrocks," he says, "had identified that the Turf Tidy was a product that would fit the specification - a demo not being needed due to having dealt with Charterhouse Turf Machinery before and knowing that the Redexim equipment was high quality."

Dougie Archibald from Charterhouse assisted Sharrocks in the installation of the machines at the end of 2013. A mixture of flail and scarifier blades were selected for the purchase. In addition, both Turf Tidys are soon to be fitted with wing blades that cause a 'draft' under the machine which will allow debris to be sucked up into the hopper. The scarifier option will be brought into play later in the year for end of season maintenance. Birkenhead Park & Central Park teams both report the machines to be easy to operate and say that whilst they are using 80hp tractors to power them they could be of a lower horsepower.

The Turf Tidy is a very versatile machine incorporating de-thatching, flail cutting and sweeping. It is designed with a fully floating cutting head that follows the grounds' contours ensuring clean and even pick-up and runs on large rear "flotation" tires to minimise compaction.