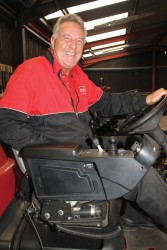 Bob Hill is a modest perfectionist who is utilising his experience to help produce top class results at the Forest of Arden. His experience is a product of good and bad events in his career but, today, both are combined to a positive effect.

Bob had visited the Forest of Arden to carry out machinery repairs on a number of occasions and had a fondness for the course. It was, therefore, quite a moment when he was invited to a meeting with course manager at the time, Kenny Mackay.

Kenny explained to Bob that he had heard, "you are the top man for Toro." This was clever thinking on Kenny's part as he knew Bob's expertise would reduce repair bills and help eliminate downtime, especially when major tournaments were taking place. Bob accepted Kenny's job offer in 2000.

Bob's experience has accumulated over forty-one years in the trade. He began his career in 1969, at Kings Heath Mowers, fixing domestic machines, before moving to become George Bagnall's mobile mechanic. With a Land Rover and CB radio, call sign Park Sugar, Bob would go out fixing breakdowns on site.

After a period working for himself and, looking for financial security, Bob joined Alexander's Horticultural Ltd in 1986 as spares manager. Alexander's had recently been appointed Toro main dealers. On his first day, thirty new GM3 mowers were delivered, a machine Bob rates highly to this day. Toro's later decision to cease their supply agreement with Alexander's saw Bob move to E.T. Breakwell, in 1998, as stores manager. With the demise of Breakwell's a couple of years later, Bob's workshop, stores and management skills were snapped up by the Forest of Arden.


Bob is responsible for maintaining the mainly Toro fleet, ensuring the machines produce top class results. Starting at 4.00am, he ensures that every machine is ready to go as soon as the greenkeepers arrive. Head Greenkeeper, Rob Rousen, will tell Bob the day before which machines will be required.

As each machine returns from its daily duties, the radiator is blown out using an airline, before the entire machine is washed down, removing every trace of grass or dirt. All cutting equipment is sprayed with WD40 to prevent the cutting edges going rusty. The machines are finally parked neatly in size order.

Each operator reports any issues to Bob, which are recorded on a white board in the workshop as a reminder. Bob has created a service log for each machine. The log is completed each time the machine has any work carried out, such as an oil change or sharpen. Bob is proud of the fact that "every mower is usable."

Bob monitors the cutting quality of the machines by making regular tours of the course. To maintain consistency, all machines are set at bench height. For example, the greens are cut at 3.5mm but, when this is checked on the green with a mirror or prism, actual height is between 1.5mm and 2mm depending on sink rate.

Bob has a range of preset height gauges. These give him the confidence that each machine will go out at the same height. Rob occasionally has specific requirements, for example cutting the fairways down to 10mm to assist with a fertiliser application. Bob's experience allows him to discuss with Rob potential unsightly outcomes, make suggestions and reach an amicable agreement.

When Bob started at the Forest of Arden, he inherited a spare parts stock with an estimated value of £30,000. Today, Bob's spare parts stock is somewhat more modest, but does include two sets of filters and two sets of blades for each and every machine. It is evident that frequent checks and regular maintenance reduce the risk of an unexpected breakdown.

Bob is loyal to original equipment parts. Many of the machines are within warranty periods, so the use of genuine parts eliminates the risk of a rejected claim. Even outside of warranty periods Bob still uses genuine parts. Non genuine alternatives may offer cost savings, but Bob explains that many manufacturers have recognised this and brought the prices of their products in line. He will not sacrifice safety and quality for a few pounds saved.

For example, the Toro Sidewinder rotaries have three blades that cost £60 per genuine set. Bob believes fitting genuine blades ensures the machine performs correctly and, being correctly balanced, eliminates vibration. When the blades become worn they will be replaced with a new set.

Bob explained that if the blades are sharpened, and a piece of metal becomes detached hitting a person and/or damaging the machine, the mechanic is responsible. Bob reminded me of the phrase, "where there is blame there is a claim."

Bob identifies the parts he requires online and is also able to check stock and price. If required, he can receive parts ordered before 2.00pm by 9.00am the next morning. He has a shortlist of suppliers that includes Abbey Mowers, Turner Groundscare, Crown Oils, and Pearmans. He restricts the number of suppliers used to help reduce the amount of administration required.

All Toro machines at the Forest of Arden are replaced as part of a rolling five year programme but, even as they approach replacement, it is difficult to see the difference between new and old due to the care they receive.

The other machinery is replaced following an annual consultation between Rob and Bob. Both offer their thoughts and reasoned arguments before deciding on their final choices.

Indeed, this year, Bob was adamant the sprayer should be replaced and has even sacrificed a new grinder for his workshop to secure the purchase. However, recognition of the value of the workshop is supported by the investment in a new two post ramp, able to lift three and four wheel machines, and a new heating system to keep him warm in the winter months!.

Bob is passionate about Toro machinery. He believes they are the forerunners as the machines are tested for longer. However, when quizzed as to his favourite machine Bob replied "Each manufacturer has its own top products. Toro has golf equipment and John Deere has tractors."

Bob remains a little sceptical about hybrid and electric machines "You have still got an engine and hydraulics," he said. "And battery technology, at this point in time, is still in its early stages. Some mowers are claimed to be able to cut 18 greens on a charge but, if you are double cutting, then you have 36 greens." It was to be proven if the cost comparisons between a standard machine and a hybrid machine would stack up, he says.

Bob is also a solver of problems. To protect the sprayer booms and assist the operator, Bob designed and fitted a self levelling system when operators of the 5410s were finding that the boxes were jumping off. He came up with a hook to restrain the boxes. His ideas and solutions for Toro machines are passed to Clive Pinnock of Lely UK, who he has known through the service side from the 1980s. Once approved, these solutions are communicated to dealers throughout the UK.

One of Bob's worst experiences was an accident at work, in which his right hand was crushed between a loader ram and the loader boom. Perhaps a case of shutting the door once the horse has bolted, he has since strictly coordinated a health and safety programme. All grounds staff using any mechanical equipment receive an induction on how to operate each machine safely.

Each operator has their own machine safety log, which is similar to a driving licence, and only allows them to use a machine once it has been signed off. Every day, except Thursdays, when a full health and safety meeting is held, short refresher or tool box talks are given by Bob to ensure safety awareness is in the front of their minds. Through his own hard lesson Bob now instils putting your own safety first. He says, if in doubt, stop and complete a risk assessment and, if you are still unsure, ask!

During the winter Bob runs lectures on machinery maintenance. Time spent explaining how to use, set up and service a machine can add considerably to its working life and save costly call outs to simple fixes. His training is designed to be 'hands-on' practical, so participants enjoy the course and leave with a sense of achievement. Bob recognises that there is a lack of knowledge within the industry and tries to encourage new mechanics to his courses.

Marriott's Spirit to Serve philosophy recognises 'people are the most important asset', and Bob Hill is one such asset. Whilst any championship course with 36 holes could justify its own mechanic, I have seen that the role of a mechanic can encompass so much more. In fact, you could say that Bob Hill is worth a couple of Bobs!