Two of Ransomes Jacobsen's longest serving football club customers, Colchester United and Tottenham Hotspur, clashed in the fourth round of The Emirates FA Cup, with Tottenham comfortably progressing to the next round with a 4-1 victory. Ransomes Jacobsen is a Textron Inc. (NYSE: TXT) company. 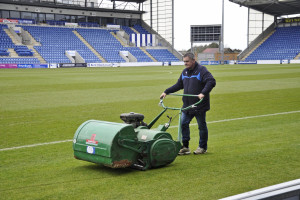 The match was played at Colchester's Weston Homes Community Stadium before a sell-out crowd of 10,000 on a pitch prepared with a Ransomes Mastiff 36-inch walk-behind mower that is over 30 years old.

Stadium groundsman Dave Blacknall has been with the club for 27 years, having begun his career as a 16-year old Youth Opportunities trainee at Nottingham Forest. He spent six years as a junior groundsman at his hometown club before moving to Colchester's old Layer Road stadium in 1989.

"We purchased our old Mastiff in 1992," he said. "It was second-hand and 8-years old at the time, but in all that time it's been bullet-proof. I have it serviced once a year at our local dealer Ernest Doe & Sons, and it never lets me down. The same can be said for the newer one, which we purchased new when we moved from Layer Road to the Weston Homes Community Stadium in the summer of 2008."

The old Layer Road pitch was just natural native soil with no proper drainage system, but the new stadium playing surface is Fibresand sitting above an imported soil-derived base profile.

"In the beginning, the Layer Road pitch was a nightmare," Dave added, "We would add 100 tons of sand every year, gradually working it in to produce a very acceptable playing surface, which received numerous compliments. The new stadium pitch had a few issues initially, but I think we're improving season by season. We add additional Fibresand every 2-3 years and verti-drain more often, both in the top 100 mm and down to 300 mm with large tines. We've got a primary lateral drainage system feeding into 6-inch mains pipes and have added diagonal sand slits and sand bands, which has helped enormously.

"You can do all this work, but you are judged by how well the pitch looks. In my opinion, if a pitch looks good, it invariably plays well. And the Ransomes Mastiff certainly comes into its own for match-day presentation. The quality of cut is absolutely superb and it gives the best finish of any mower, by far."