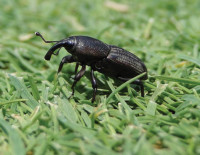 It is important for turfgrass managers to be aware of two new insect pests of turfgrass - the hunting billbug and the sugarcane beetle - and the challenges in managing them.

The hunting billbug is not necessarily a new pest of turfgrass; previous literature has noted their presence in cool season turfgrass. Recently, it has become prevalent in the southeastern United States in warm season grass, primarily on bermuda and zoysia grasses.

The sugarcane beetle was first discovered in North Carolina a decade ago and has become a much more significant problem in the last three years, exclusively targeting bermuda and zoysia.

The challenge in managing both of these insects is that relatively little is known about their biology and ecology in warm season turfgrass. Extensive research is being conducted at North Carolina State University to determine the lifecycles of these insects and to develop management practices for turfgrass managers.

The hunting billbug (Sphenophorus venatus vestitus) was first described as a pest in 1956 on zoysia grass in a Florida nursery. A native to the southeastern United States, it is one of the most widely distributed and abundant billbug species. They can be found from New Jersey to Florida, through the Gulf States into Texas and north to Kansas and Missouri. They primarily feed on zoysia grass and hybrid bermuda grass, but also have been noted as pests on bahia grass, centipede grass, St. Augustine grass, seashore paspalum, tall fescue, Kentucky bluegrass, perennial ryegrass, and Chewings fescue.

Hunting billbug adults measure 0.3-0.4" in length and are black, charcoal grey, or brownish in colour. The distinguishing characteristics for this species are a smooth, non-punctated Y-shaped area behind the head and parenthesis-like curved markings on the sides of the pronotum. They typically overwinter as adults or larvae in the thatch or soil.

Adults emerge from their overwintering sites, as temperatures increase in the spring, to feed on the turfgrass and mate. They are active at night and will feign death when disturbed. Adults will lay oblong, creamy white eggs from May into September. Eggs hatch in 3-10 days and the larvae that emerge are white, legless and have a brown head capsule.

After the larvae emerge, they immediately begin feeding on the turfgrass stems and, as they mature, the crown, roots, and stolons. Larvae are most common from May to October and can be found from the thatch to 6 inches deep in the soil. They reach full maturity in 3-5 weeks after egg hatch and then pupate in the 2-4 inches in the soil. They spend 3-7 days in the pupal stage and then emerge as adult hunting billbugs. This cycle continues until temperatures decrease in the autumn.

Hunting billbug adults and larvae feed on stolons, crowns, roots and new leaf tissue. Due to feeding, the grass lacks sufficient roots to obtain water, nutrients or stay anchored to the soil. Damage caused by hunting billbugs can be characterised as irregular, elongated or rounded areas of brown, dying grass and tufts of grass are easily lifted from the turf stand. Symptoms usually occur in spring and autumn when adults are most abundant.

Since the adults are active on the turf surface at night, they are easiest to monitor by going out at night with a head lamp or flashlight and looking for them on the turf surface. This will not only tell you if hunting billbugs are present, but their relative population size. A second method would be to install pitfall traps in areas you believe hunting billbugs are active. The easiest way to install the traps is to take a cup cutter, remove a core of grass, and place a cup of equal size to the core you removed, in the remaining hole. This will allow you to trap adults as they are moving around at night. This method is effective at determining that hunting billbugs are present, but not the relative population size. 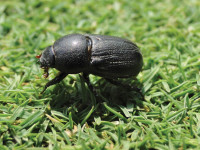 Sugarcane Beetle - although first recorded in the United States in 1856, the sugarcane beetle has not been considered a pest in turfgrass until recently. Although the adult stage was initially a pest in sugarcane, they have since been known to attack a wide variety of plant crops (corn, rice, roses, tobacco, strawberries, sweet potato and turfgrass).

Adult beetles are about 0.5" long and have distinctive punctures outlining vertical stripes that run the length of the abdomen. Not shiny like similar beetles, sugarcane adults are typically dull black with soil particles clinging to the puncture marks in the thorax and abdomen. Since sugarcane beetles are scarab beetles, the larvae are white grubs. It can be difficult to visually distinguish white grub species, so it is best to be familiar with the life cycles of these insect pests and know when they are active throughout the year to anticipate larval presence.

Unlike other scarab beetles, the sugarcane beetle overwinters as an adult. The adults begin to emerge in mid- to late-March and flight activity usually peaks around the last week of March and first week of April. After emergence, the adults mate and lay eggs. Larval populations are typically present approximately two weeks to two months after peak adult flight. While development continues underground during the summer, adult activity decreases. A second generation of adults emerges in the autumn (September-October) and, depending on temperatures, can be active through early winter.

Sugarcane beetles are primarily pests of bermuda grass but have also been found in zoysia. It is still unknown whether the beetles actively feed on the plant itself or on organic matter in the soil but this, amongst other biological questions, is the focus of current research.

Although white grub populations are a constant source of concern, it is believed that sugarcane beetle adults are responsible for the majority of turf damage, both directly and indirectly. Active adults are capable of burrowing or tunnelling near the soil surface, causing distinct ridges in the turfgrass. Additionally, nighttime beetle activity can attract foraging animals to the area. Digging for adults under the soil surface can cause inadvertent damage to the turf.

Scouting for sugarcane beetles requires very little effort. As nocturnal insects, they are attracted to light, so the best time to scout for these insects is at night, underneath or near a light source. In areas of a heavy infestation, sugarcane beetles will initially reside in the grass underneath a light and then move out radially as the population increases. Adults typically are active in the late hours of the evening, just after dusk, crawling on the turf surface. Sugarcane beetles are also found in recently-cut sod, at or just below the soil surface.