0 Two pitches in one at Maltese stadium 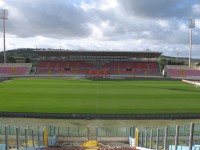 Malta is not known for its footballing prowess; more for the fact that this Mediterranean tourist destination was awarded the George Cross for being the most bombed place on earth during the Second World War.

However, very impressively, this tiny island of just 400,000 inhabitants has a thriving national league comprising no less than fifty-two teams in four divisions. The Premier League has twelve teams, and all of them share just three stadia (two natural turf and one artificial) to fulfil their year-round fixture list.

On a Limagrain organised visit to the Maltese FA's National Stadium, I used the opportunity to have a chat with the groundstaff responsible for maintaining not just the stadium itself and an adjacent natural turf training area, but also the other two stadia used by the Premier League teams. 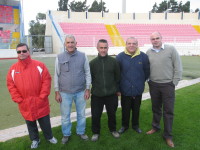 The grounds team comprises Emanuel Cassar, in overall charge and Infrastructure and Projects Manager, Victor Mifsud, the Head of Stadium Management, Joe Azzopardi, who has responsibility for the National Stadium, and Michael Camilleri, who looks after the training grounds. The team is ably supported by Nunzio Frendo, the financial assistant.

The National Stadium is a 17,000 all-seater which boasts an impressive, modern Millennium stand containing the association's offices, executive boxes, swimming pool and gymnasium. The current stadium may have a relatively small capacity since its improvements but, as Victor was quick and proud to point out, before the new stand was built, a record crowd of 32,000 watched an international against Germany.

To accommodate the extensive league fixture list, the stadium has to stage 130 matches per year, normally back to back each Sunday, kicking off at 2.00pm and 4.00pm. Again, Victor was keen to tell me that there are also occasions during the season when five matches have taken place in a three day period! 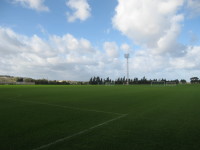 Understandably, the sand based pitch sees a lot of wear and tear, however, the general maintenance routine is fairly standard with cutting three times a week using a Toro ride-on, and weekly solid tining.

Aeration is a key aspect of their work, explained Michael who then, rather more enthusiastically than was probably necessary, told me that worms are actively encouraged, even to the extent of having them brought in by the bucketload during the season! The grounds team, apparently, are happy to deal with the smearing that might result from any casts.

Being an island brings many logisitical problems, not least the prohibitive cost of importing most amenity products. As a result, local agricultural fertilisers are used out of economical necessity rather than preference. One unavoidable expense, however, is sand for dressing the pitch, and this has to be brought in by the boatload from Rome. Local sand didn't have the properties needed plus, as Victor explained with a knowing smile on his face, the Maltese authorities weren't too happy with the prospect of losing their already limited number of beach areas!

I learned later that, in the early days of the stadium, the then grounds team used to make trips to the beach areas during the night to shovel sand on to a lorry, which was then used on the pitch.

The biggest challenges to the grounds team are the lack of rainfall and the very high summer temperatures they have to face. Winter temperatures hover around the 10OC mark but, in summer, they can be 40OC plus.

Not surprisingly, such variance in temperatures puts the turf under great stress. The stadium has an automated irrigation system, operating perimeter and three portable sprinklers for the centre of the pitch, which can use up to 23,000 gallons of water per day at the height of summer.

However, at the moment, there is not a species of grass capable of withstanding these temperature extremes, which is why the stadium pitch undergoes a complete re-seed twice a year. These operations take place in May and October, with an American fescue mix used in readiness for the summer fixtures, and a four way ryegrass mix (MM60) to do the winter shift.

Apart from totally scalping the pitch in May, to give the fescue a better chance of establishing, the two renovation processes are exactly the same. The pitch is cut as low as possible, scarified and hollow tined; the cores are then broken up, with the surface levelled before the pitch is re-seeded followed by the sand dressing. The irrigation then comes into its own, especially in May, to ensure the seed germinates. From start to when the games are being played again is not normally more than four to five weeks.

If looking after the island's teams wasn't enough, they also have to prepare the stadia and training area for numerous international and European club teams who use Malta as a base for their mid-winter breaks. The change in scenery, milder weather and the opportunity to savour the wonderful Maltese hospitality can give teams a timely boost for their end of season run-in.

Hmm, I wonder if they could accommodate Wolves for a few days ...