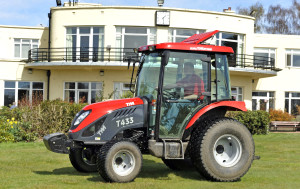 Known to be one of the very best courses in the area, the two TYM tractors formed part of a one-package replacement programme alongside Toro. Delivered in the spring of 2016, now's the time that head greenkeeper Dave Macavay has been most looking forward to when it comes to putting the new T433 and T503 tractors through their paces.

Dave says: "We have of course been using the tractors since they arrived in April, it has been 'all hands on deck' for every item in the package with us hosting the Four Counties Junior Tournament and wider general course maintenance, but now we're entering the time of year when the tractors will be working more than the mowers. So far we're really pleased with the performance of the tractors, but in autumn and winter the work gets harder and heavier, so that will be the real test."

The T433 is a good choice for pulling equipment over a sizeable distance, it's big on power and performance and is being used primarily by Dave for verti-draining and spiking. The T503 on the other hand is perfect for big projects. Dave says: "We have numerous projects on at this time of year. We've been building bunkers and putting drains in and we've the front and back buckets on the T503 most of the time as it seems we're constantly trenching, loading and moving earth around! Both machines are definitely getting well used."

Dave explains why the club opted for TYM, the first they've had: "There were a lot of factors that led to us choosing TYM and the fact that we'd made the decision to go with Toro in a fleet replacement deal and how well TYM work alongside Toro machinery was instrumental. Together we have what I consider to be an excellent and reliable fleet."