0 Twyford School - A kind of magic!

Twyford School is one of the oldest Prep schools in the country and can trace its roots back to the late 18th century. Twyford has occupied its current site for over 200 years and is situated in the heart of the village of Twyford, which lies three miles south of Winchester. The school nestles within the outstanding South Downs National Park on the outskirts of the historic city of Winchester, with approximately twenty-five acres of extensive and attractive grounds. The beautiful Queen Anne school building sits at its heart and creates a wonderful country feel and atmosphere. During the nineteenth century, buildings were added, including a large schoolroom built in the 1820s, and a mid-Victorian chapel. Original buildings are still used today, with additional building works continually undertaken to keep the school boasting modern facilities whilst successfully maintaining its historical fabric. In addition, the sports grounds and other outdoor facilities have been upgraded.

Twyford is an independent school, and a registered charity. It welcomes both day pupils and flexi-boarders and has a Pre-Prep school on the same campus for children in Nursery to Year 2. As a whole, it has capacity for around 400 pupils aged 2 to 13.

I met with Matt Trickett on a beautiful sunny day during Half Term to find out how he manages the extensive sports pitches and surrounding grounds. As you can imagine, the school was incredibly quiet without its 400 pupils, and I soon realised the enormity of the role and responsibility Matt had taken on since starting at Twyford six years ago in the summer of 2015.

Matt explained he'd been involved in groundsmanship for over twenty years, although in those early days as a volunteer alongside his day job. He quickly began to realise that groundsmanship was his true calling and vocation and embarked on gaining his NVQ 2 and 3 qualifications in 2007 and 2008 and picked up his City and Guilds A1/D1 assessor status along the way. All this whilst employed as Senior Groundsman for Fair Oak Parish Council from 2006 to 2012, Eastleigh Football club 2012 to 2013 and Alton Town council 2013 to 2015. The passion for maintaining surfaces for his two favourite sports (cricket and football) saw him volunteer his services for Hambledon Cricket Club for nine years. He spent a year at Hampshire County Cricket Club, was offered a part time contract, before later returning to Hambledon. Matt is currently Hambledon's Ground Consultant and continues to support the club when he has time.

If you're like me, time is something that most of us wish we had lots more of in our roles as there never seems to be enough hours in the day to get everything done! But, for Matt, I was truly inspired by what he was achieving and the surfaces he was producing in the time he had. I couldn't quite grasp how one man (yes, just one man) was successfully achieving it all.

Twyford School offers an impressive selection of sporting activities from cricket, football, rugby, hockey and netball to lacrosse and athletics (luckily Matt doesn't have to worry about the indoor swimming pool)! I joked that I thought he should be wearing some kind of superhero costume when he began reciting all the areas he had to prepare on a seasonal basis:

• 1 Astro-turf cricket wicket; which converts into 6 tennis courts in the summer and in the winter the Astro makes one large hockey pitch, 2 x small pitches and 3 x netball courts So, my burning question for Matt was "How does one man complete all this work?" Well, Matt explained it all boils down to a structured routine, efficient time management and long hours! Most matches are scheduled for Wednesdays and Saturdays so preparation, like everything, is key and revolves around those fixtures. Matt explains: "My normal working hours are 8.00am until 4.30pm but I usually stay until things get done! Mondays I usually try to mow all the larger areas, outfields or pitches on the lower fields, and Tuesdays I try to cut the upper fields nearest the school. The upper areas being used for the senior years games, and of course, I know I can revisit this job again later in the week if needed. However, whilst mowing on these days, I also need to shuffle marking out in between and any repair work which is required."

"On match days (there can be eight competitive cricket games on both days), I manage to squeeze another cut in on the wicket when its cricket and freshen up any lines as I feel needed. It's hectic, and sometimes the weather has different ideas but, overall, all works out well. It's helped with being on a chalky soil which, as part of the South Downs National Park, is very free draining. This soil type does present problems however, as it can compact quickly if not kept on top of and is low on nutrient levels which, of course, helps re-establishment of my multi used surfaces."

To help maintain nutrient levels, Matt applies a general spring slow-release fertiliser and follows up with an autumn granular feed bought from Avoncrop which does the trick for the year. It's important not to create artificial 'flushes' of growth as this would only compound the extensive mowing required. I discussed Matt's limited use/availability of water to maintain his surfaces and he explained that he didn't overly water, even if he could. Matt explained; "The watering points are limited to the upper field areas nearest the school buildings. When required, I use a couple of small travelling sprinklers which tend to give some respite to drought conditions. The pressure isn't the best and our sprinklers certainly don't throw out huge volumes of water but that's okay. I believe in sustainability and the natural dry 'look', I'm pleased to say it's a belief shared by the school too." Chemical usage is kept to a minimum as well and this led on to a wider discussion about sustainability. Matt, and the School, are very much aware of environmental issues and have some excellent 'best practices' already in place. The extensive grounds have an abundance of mature trees and Matt explained most are covered by a Tree Preservation Order. Tree surgeons carry out a survey every three years and all remedial works are carried out by professionals. The wood chippings are stored and used for ground cover in all the landscape beds around the school which is a great way to re-use the spoils of the land. Matt went on to explain the possibility of a future re-cycling bay (or bays) for grass waste, twigs/leaf debris and weeds and this could create great compost for future garden schemes.

It was enlightening to see the sheds and realise that Matt achieved all he had with the basics. His motto 'Stick at it, adapt what you've got and make it work' (see Getting Personal with Matt Trickett) has definitely paid off. Matt's attention to detail with all his paperwork and records were second to none. He had all his COSHH data information, risk assessment sheets, chemical usage records and machinery daily maintenance logs all up to date, which I commended him for as no mean feat as he was obviously such a busy man.

It was clear to me that Matt has a great passion (and skill) for communication. He works closely with the sports teaching team who regularly give him the 'heads up' if fixtures are changed at the eleventh hour. "It's hugely helpful to maintain great lines of communication with Gregg Lewis, and the sports team staff are brilliant," said Matt. "They not only help me with fixture changes but sometimes come out and help with rolling the wickets or assisting me with interpreting the rules and how I set up the various pitches. I really value their support". 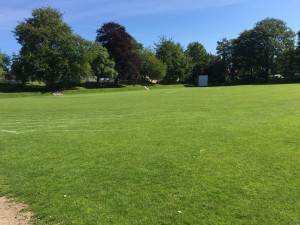 • Gregg Lewis - Head of Sport and all the sports staff

Matt's knowledge, passion and enthusiasm has already been 'spotted' by the School and there is a possibility that Matt may begin delivering apprenticeships in the future to the students. Matt was immensely proud of the opportunity to educate the students and explain his role of groundsman and the wonderful industry of sports turf maintenance we all love. Well done, Matt!