Manchester is one those great northern English cities where football is appreciated with almost fanatical enthusiasm. It is hardly surprising when you look at the sheer quality of the two premier league clubs representing the famous old city of three rivers - the Medlock, Irwell and Irk.
JOHN REYNOLDS heads north to meet the lads at Manchester City who are, apparently, mad for it!

The three rivers of Manchester helped to lay the foundations for a huge textile industry. By the end of the 18th century the city had established itself as the centre of the cotton spinning industry. By 1790 there were over one hundred water-powered cotton spinning factories in and around Manchester. At the same time there was also a thriving coal mining industry. This industrial heritage spawned hardy, working class, men and a pre-requisite was a football team or two to support.


Manchester City FC originated out of St. Mark's West Gorton FC which was formed in 1880 by St Mark's church in Clowes Street, West Gorton. The youngest player was aged just 15 and the eldest 20, and most of the club members played in the cricket team too! In 1884 the name was changed to Ardwick AFC and, in 1887, they moved to Hyde Road the club's first properly enclosed ground. The club later decided that the name should represent the whole of Manchester and, so, Manchester City FC came into being in 1894, remaining at the Hyde Road ground until the early 1920s.

Maine Road, regarded by many as City's spiritual home, opened in 1923 with a capacity approaching 90,000 spectators. Nowadays we consider crowds of around 40,000 pretty high but, in 1934, 84,569 fans turned up to watch Man City v Stoke City. That same year City won the FA Cup Final against Portsmouth.
In 2003 Maine Road staged its last ever football match and, despite many a shed tear from the faithful, a third move was made to the City of Manchester Stadium.
It had initially been created to house the Commonwealth Games of 2003 but, no sooner had the discus and javelins been packed away, the diggers moved in and lowered the ground area by six metres to accommodate the new football pitch. A lower tier of seats was installed and the entire North Stand was erected. The first game took place in August 2003. 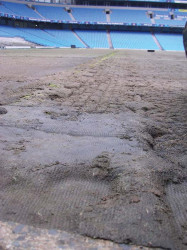 Capacity at the stadium is precisely 47,726 seated for football, approximately 62,000 for concerts (all standing) or 44,000 when seated on the pitch. There are 218 floodlights producing 436,000 watts of power, 86 turnstiles and 35 sprinklers for irrigation. Dimensions of the pitch are 105 metres long and 68 metres wide giving a total playing area of 7,140 square metres and a total grass area of 9,430 square metres.
The stadium has twice been highly commended for the standard of the pitch - 2003/4 and 2005/6. It also won the BALI award for pitch construction in 2004. All of this is fine testament to the dedication and skills of the builders and groundstaff.


Head Groundsman, Roy Rigby (middle of picture), joined the club in 2001 from Blackburn Rovers where he had been in charge of the training ground for ten years. Prior to that he worked as a Groundsman for Blackburn council and has spent an impressive total of 34 years in the turfcare industry. Roy commutes each day from Clitheroe where he lives; he is married with two grown-up children. A keen Crown Green bowls player (when time used to allow) and ex county team member, Roy rises at 5.00am every morning to make the journey by car to the stadium. "It's no hardship" says Roy, adding "When I go to bed at night, I can't wait to get up in the morning and get into work, that's how good this club is to work for." 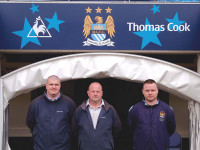 Roy's enthusiasm is equally matched by his Deputy Head Groundsman, Lee Jackson (Left). A Manchester lad born and bred, Lee has worked at the club since leaving school seventeen years ago. When asked about outside interests and hobbies, Lee laughs: "I don't have any time for that stuff, my work here is very demanding and we want everything just right. We owe it to the club and the players to make sure that they have the best possible surface to play on and 'less than best' is not in our vocabulary here."


The enthusiasm of these guys is just amazing and infectious. By now, camera in hand, I am demanding to see the revered pitch! I am not disappointed either. The Desso specification grass sward is beautifully manicured and superbly presented.
The pitch is constructed over approximately nine metres of indigenous clay supporting 100mm of stone capping, followed by (working upwards) 100mm gravel then 50mm blinding grit topped with 200mm medium fine sand and finished with 100mm 70/30 rootzone.


The Desso Grass Master is 100% natural grass reinforced with Desso synthetic grass fibres. As a standard practice during construction the manufacturer specifies that over 20 million artificial grass fibres are injected 20cm deep into the pitch. This equates to 40,000km of fibre strands in a single playing area (the circumference of the world). The natural grass roots then entwine with the synthetic element to anchor the turf, making it substantially more durable and stable. Approximately 3% of the pitch is made up of these artificial fibres or 'hairs', giving the feeling and characteristics of playing on a conventional 100% natural grass surface, but with much increased strength. A normal natural pitch can take a maximum of 300 hours of play a season. A Desso pitch will take easily three times that with much less damage and, accordingly, over 250 of them have been installed worldwide. Lee Jackson explains. "Maintenance of the Desso system is comparable to that of a conventional grass pitch in terms of mowing, scarifying, fertilising and re-seeding. Frequency of mowing depends greatly on temperature and humidity. As a rule of thumb at Manchester City, from end of season renovation to the start of new season 30mm mowing heights are maintained. From the start of the season to the end of October 22mm, from end of October to end of March 25mm, and from April to the end of season the height is gradually lowered from 22mm to 14mm. In the winter the pitch is cut when required depending on conditions and, in spring, usually twice a week, increasing to five times a week in the summer months."


The area on which the stadium is built was subjected to a series of minor earth tremors in 2003 due to subsidence of old industrial mine workings. Around one hundred were recorded with some measuring up to 4 on the Richter scale! Despite this unusual phenomenon, the stadium is, nevertheless, totally safe and their occurance was viewed with some bemusement by the fans and everyone else at the club.
End of season renovation work will commence on either the 5th or 25th June depending on the final number of events that are scheduled. Preliminary work will include a Koro and Verti-Drain to remove the existing sward and decompact the soil prior to the pitch being covered in preparation for these events. These include a Ricky Hatton fight and concerts by the Foo Fighters and Bon Jovi. Renovations will be completed using a combination of in-house skills and contracted out heavy duty work by John Mallinson (Ormskirk) Ltd.


The renovation process begins with fraise mowing in two passes using the ubiquitous Koro Field Top-Maker followed by removal and disposal of the resulting debris. Next comes the vertidraining using 25mm tines to 150mm depth at 100mm centres. After this initial phase is completed the in-house work begins in earnest.
First of all the pitch is intensively raked with a Wiedenmann Verti Cut Harrow and vacuum brushed to remove any debris. This is followed by solid tine spiking using 16mm spikes to 100mm depth and 100mm centres. A medium sand mixed with Rigby Taylor Profile Soil Amendment is then applied at a ratio of 2:1 across the width of the 6 yard box before drag-matting and brushing.


Attention is then turned to the goalmouth areas and touchlines, beginning with solid spiking as above and hand raking to raise the Desso Grassmaster fibres. The sand/profile mix is again applied prior to using a lute and drag-mat to incorporate the material into the 10mm deep holes. Lastly, the area is lightly hand raked to raise the grass fibres again. 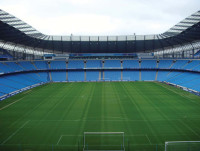 The next operation is seeding, and the whole area is thoroughly raked before sowing a Barenbrug Bar 7/custom seed mix at 35g m2 plus a Scotts 8:12:8 pre-seed fertiliser and a 19:5:18 slow release formulation. Once the seed is established the pitch is vertidrained using 12mm tines to 150mm depth and 10mm centres.
The renovation work complete, grass germinated and establishing nicely, light mowing can commence to encourage tillering. Fertiliser is now applied every three weeks using conventional 12:0:12 and 0:0:37 slow release formulations to provide the required nutrients.
At the end of September a further application of conventional 7:0:14 autumn and winter fertiliser, and a 15:0:26 phased release analysis, will be applied and repeated in mid November to take the well established sward through to December. The programme is then changed to 4:0:8/15:0:29 and, from March to the end of the season, reverts to 7:0:14.


In addition to this, the staff also apply high magnesium supplements and a growth promoter when deemed necessary. The club has only suffered two attacks of fusarium in five years, although last season they had to spray for leaf spot ten times. The only other pesticide application is two 'insurance sprays' for leatherjackets in the autumn.
Lee Jackson says, "It is a point of honour here that it is just over thirty years since a 1st team match was called off due to the pitch being unplayable. We intend to maintain that tradition!" 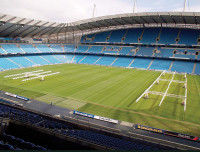 The club has recently invested around £250,000 in four large and two small Stadium Grow Lighting rig made by Dutch Company SGL B.V. This enables regular overseeding to take place all season under ideal germination conditions.
Besides Roy Rigby and Lee Jackson there are a further seven groundstaff, including Gary Conway who assists Roy and Lee at the stadium and Steve Malone, Head Groundsman of the Carrington 1st and reserve team training ground. Adjacent to the main stadium is the 6,000 seat City of Manchester athletics stadium where the reserve team plays. Platt Lane is home to the Manchester City FC Academy.
It was a joy for me to meet the groundstaff at Manchester City FC and the day was made all the more interesting by witnessing the sheer enthusiasm and ability, coupled with a genuine desire and willingness to do their absolute best for the club.
My sincere thanks to Manchester City FC for their kind hospitality during my visit.